Enzo Fittipaldi maximised his P9 place on the grid, to go second on the podium in todays FIA Formula 2 Budapest Feature Race.

In the first few corners, the Brazilian overtook four drivers to be in P5 by the end of Lap 1.

In the final stages of the race, Fittipaldi looked to be catching race leader, Théo Pourchaire, in a bid to possibly take his first Formula 2 win. Though catching and overtaking at this high tyre deg track are two very different things.

“I think on this track it was very difficult to overtake, I would have to be 1-1.5s a lot faster than Théo to have an opportunity to overtake. We were very similar pace, I was just maybe a couple of tenths quicker at the end.”

“I think we really maximised the result today. I don’t think I really could have done much more than this starting ninth; Maybe if we were starting a bit further up. I’m very happy with the result. I don’t really think if there was two or three more laps that I would be able to overtake Théo, because once you get close to the dirty air your fronts overheat and then you just drop back, so you’d have to have a really big pace advantage to overtake him.”

On the final lap Fittipaldi appeared to be going slowly and it looked like his race might end in travesty:

“I was running rearwards with the brake bias and I was pushing really hard to try and close the gap to Théo, [I had] a big rear locking into the chicane, and I had a big snap and went straight. I just slowed down, I didn’t want to risk anymore because I had a really good gap to Ayumu [Iwasa] and wanted to cross the line.”

The ambitions of the Charouz team are to finish in the top five this season, and perhaps maximise Sprint Races more than Feature Races, because of where they expect to qualify. The Czech based outfit are surpassing all expectations, with a fantastic weekend for them. Fittipaldi also finished on the podium in P3 yesterday, and today Cem Bölükbasi nabbed P13, after a great race of his own.

“It’s been a really strong weekend. We’ve had really good pace. In Qualifying we could’ve been even higher up, but I was ninth. And yesterday in the Sprint Race that mistake in Turn 2 I think if I didn’t make that I would’ve won the race. We were really fast this weekend in the race pace. And today in the Feature Race starting in ninth, it was really difficult to make the overtakes but I was able to make very good overtakes and keep a really good pace, and I was able to extend my soft stint longer than anyone else.”

On Lap 10 the team frustrated Fittipaldi when they told him to stay out one more lap. Bölükbasi was already heading in for his stop. When Fittipaldi did pit, the stop was impressively quick and tight.

“The pit stop was amazing, the team did an amazing job. We just came out right in front of Théo and obviously with cool tyres he got past me, and I was able to hold onto second. The race was really good.”

Yesterday’s third-place Sprint Race finisher, talked through his opening lap, that inevitably secured his P2 today. It highlights the plans and strategies that go into place from a team and driver.

“The cars ahead of me started on mediums, and I was in ninth so I knew I’d have to pass them in the first lap. I was able to overtake all four of them before Turn 2 and came out already behind Vesti in sixth and then I just managed the tyres and I overtook Vesti. It was difficult and hard, probably one of the hardest races I’ve ever done considering the traffic we had, from the cars in the back.

“We were catching up to them and it was very difficult to manage the tyres behind them and went to overtake. There were some drivers that were very aggressive trying to block the positions so you just had to be smart and overtake at the right time… so decision making was very important in this race.”

Fittipaldi was that focussed on his race, he stated he didn’t notice it raining in the final six laps, which demonstrates the concentration the Brazilian had to finish in a worthy position. 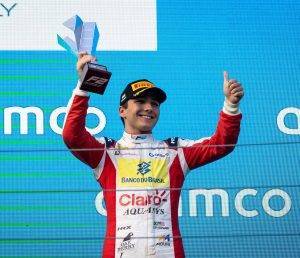