Enzo Fittipaldi  went from second on the grid, to first, then third, within the first few corners of the FIA Formula 2 Sprint Race in Budapest, that led to a temptation to dive-bomb Jüri Vips to regain his P2.

Turning his season around, from being out of the points, to podium finishes, the Charouz driver spoke to insideF2 and other selected media after today’s Sprint Race:

“Since the beginning of the season, the first two rounds I wasn’t 100% physically (from his injury at Jeddah in 2021 that saw the Brazilian fracture his ankle.)

“After that, the tests we did in Barcelona, the three days tests for us, we were able to get a lot of information. I was able to learn a lot about the tyres and warm up procedure. These three days of testing was very important for us. Not just for me but for the whole team. I think there we made a pretty big step forward; Since then we’ve always been in the top 10.”

In addition to the test weekend in Catalunya, the Brazilian driver has settled into the team well, and is maximising the experience, moving to the Czech Republic to be closer to the factory. He explained why he has improved so much in a short space of time:

“Me getting more experience, learning more about the Formula 2 car, how the tyres work and getting myself adjusted with the set up as well.”

Starting second on the reverse grid today, after Qualifying in ninth, Fittipaldi had a great start to take the lead by Turn 1, after warming his tyres on the Formation Lap. Without a mandatory pit stop in the sprint races, taking the lead can be a guaranteed win, should there be no dramas, but with the track still slippery and ‘green’, the Brazilian was caught out just a few corners later:

“We had a really good start off the line. I was able to overtake Jack [Doohan] and I was in the lead after the first corner. Turn 2, I don’t think I really braked that late, the track was very low grip and as soon as I hit the brake my left front locked up and I went straight off the track where it was a little bit damp. I was honestly quite lucky to come back on the track in third. I was almost overtaken by [Frederik] Vesti. I was able to keep my third position and we had a really strong pace in the opening laps.

“I was doing a lot of effort in the Formation Lap to get the tyres up to temperature and I did a lot of wheel-spin, probably eight or nine burnouts which normally you don’t do that many. I normally only do about two or three, but I did triple as many as I normally do, so I think I had the tyres ready for the opening lap, and I was looking ahead. The plan was to have a really good start and overtake.

“Turn 2 was a mistake but I ended up losing the win today.”

Fittipaldi stuck to the back of Vips throughout the race, maintaining DRS distance, in case an opportunity to overtake the Hitech driver for P2 came along. Perhaps thoughts about his exit in the Le Castellet Sprint Race had an influence on if he should risk a pass.

“There was one opportunity I had to overtake him which I was very close. [Laughing] I could’ve risked one into Turn 1 and did a dive bomb. I was in the moment but I was a little too far away. I was thinking about it, but I decided at the end not to do it. It was close, I was almost doing the lunge on that one lap Vips blocked. I think if he wouldn’t have moved on his line a bit, I would’ve went for it.”

In 2020, Louis Delétraz pretty much single-handedly secured all the points for Charouz; Finishing 16 races in the top eight and 10, and jumping onto the podium five times. Whilst David Beckman has a P8 finish in the Imola Feature Race, Fittipaldi has finished 10 races in the points and has three podiums after today.

It’s a mammoth effort from the Brazilian, to be seventh in the driver standings, and eighth in the Teams’ Championship, before the start of this weekend in Budapest. An effort that will no doubt attract the attention he deserves, as he paves his own #RoadToF1. 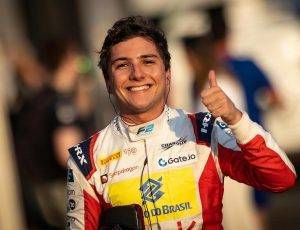