Enzo Fittipaldi reflected on his best race weekend of the season with a double podium that promoted him to fourth in the Drivers’ standings, which is Charouz Racing yet most competitive result.

Fittipaldi could put the team back on track as the Brazilian has collected four podiums in total, with four races remaining from the 2022 season. However, this is the most silverware the team had brought home since 2018, when they finished sixth with Antonio Fuoco and Louis Deletraz.

Finishing both sessions on Friday in ninth, Fittipaldi was somewhat grateful to fight for points with the hope of finishing inside the top three from the reversed grid. Despite losing the race lead to Virtuosi’s Jack Doohan in the Sprint Race, he completed a mature drive to earn vital points in the standings in third, which the team praised him for.

He also performed a recovery drive in the Feature Race to finish second from ninth. Fittipaldi risked it all on the overcut but made it work to bring home back-to-back podiums in Hungaroring, even if he had to suffer a last-lap scare that put him 3.6s clear of race winner Theo Pourchaire.

Speaking to InsideF2 before the Sprint Race, he said: “This season maybe has exceeded my expectations a little bit. We’re consistently fighting at the top now, always fighting for points.

“I’ve already had three podiums this year, two in the Feature Race, two seconds in a Feature race, and a lot of points. The only thing that’s missing now is the win.

“I’m working hard, very hard for that, but it succeeded my expectations. We’re putting ourselves in a good position to always be fighting for a win.”

The crash in Jeddah last season changed him to build more confidence in the car, which took him under slow progress to feel comfortable. Four months after the incident, Fittipaldi quickly made an impact with his maiden F2 podium in the Imola Sprint Race and has taken points regularly ever since.

Heading to the summer break with plenty to play for, Fittipaldi is still hopeful for a room to secure his maiden Formula 2 victory. He added, “The time will come; we’ll see when it is, and I hope it’s very soon.” 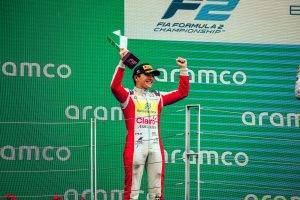