The FIA Formula 2 Championship is heading to the iconic principality of Monaco for the first time in two years this week, for what is set to be an enthralling second round.

Bahrain put on a sensational show back in March, but if you still need convincing, here are five reasons to follow all the F2 action this week.

Bahrain was full of brilliant overtaking manoeuvres, as the drivers showed off their talent and bravery, going three-wide into corners on several occasions.

Hang on a minute, it is impossible to overtake around the narrow streets of Monaco, right? Wrong. The last F2 outing in Monaco back in 2019 proved as much, with stunning overtakes, even through the tightest turns such as Mirabeau and the Loews hairpin.

Having two reverse-grid Sprint Races means that drivers looking to move up the order will have no choice but to go for daring overtakes – being conservative is not an option.

The courageous and aggressive overtaking on show last time out in Bahrain suggests that the 2021 grid will not be holding back, even at Monaco.

There is zero margin for error around Monte Carlo, as the walls wait to punish even the smallest of misjudgements.

With several drivers lacking experience of the track, they might overstep the mark in their efforts to find the limit, as some of those bold overtaking moves prove too ambitious for the narrow confines of the circuit.

We can expect a repeat of 2019’s dramatic F2 race weekend, which saw plenty of comings together, including a total blockage of the track at Rascasse.

If there were plenty of incidents around the wide tarmac of Bahrain, imagine the chaos that could ensue around the infamous street circuit this week.

3. The Field is Fiercely Competitive

Three different drivers took race wins in the opening round of the season, with multiple drivers and teams competing at the front throughout the weekend.

With such a tightly contested championship, victory can be decided by the smaller of margins, meaning that every mistake or incident will turn the heat up even higher on the title fight.

Guanyu Zhou will be satisfied with his 11-point lead overall, but behind him, there are several drivers that will feel the need to make up ground in the championship.

The drivers will waste no time getting stuck in, as every point counts.

4. Strategy Could be Decisive

Bahrain saw the momentum swing back and forth between drivers depending on tyre strategies, as cars came charging through the field late on, while others struggled to hang onto tyres that were well past their best.

The teams may once again look to alternative strategies, particularly in the Feature Race, to gain a crucial pace advantage and make overtakes in the latter stages.

Add incidents and potential safety car periods into the mix, and the strategic battle for victory could become even more critical.

The jewel in the crown always brings an extra element of drama, as the cars pounding round the streets of Monaco provides one of the greatest spectacles in motorsport.

The cars will be running close to the walls on every turn, as the unforgiving circuit creates unrivalled peril, ramping up the pressure on the drivers.

Races on the Circuit de Monaco are always tense, white-knuckle affairs, and this week will be no different.

Keep up with all the action in Monaco here at InsideF2 by following our live race blog, and join our community on Discord to discuss all things F2! 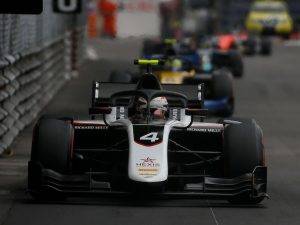