FIA Formula 2 has announced its 2022 calendar, which is set to be its biggest ever with 14 rounds and 28 races.

With the series returning to its traditional two-race format for 2022, Formula 2 will return to several venues that were last seen on the 2020 calendar, with Barcelona, Red Bull Ring, Budapest, Spa Francorchamps all returning after a year away.

The season will kick off in Bahrain on the 18th-20th March before heading to Saudi Arabia for Round 2 a week later.

Imola will welcome the series back after 16 years away in late April, with Barcelona rejoining the calendar to host round four of the series in late May.

Round 5 of the championship will see Formula 2 battle on the iconic streets of Monte Carlo, with the series racing on the streets of Baku a fortnight later for the sixth round of the Championship.

The Hungaroring hosts the final race weekend of the season before the summer shutdown of just under a month.

Spa Francorchamps will welcome the championship back in the last week of August, with Zandvoort making its Formula 2 debut when it hosts Round 11 of the Championship.

Monza and Sochi finish the European section of the calendar before Yas Marina hosts the season finale in late November.

Formula 2’s CEO Bruno Michel expressed his delight with the new calendar, with Michel openly admitting that several other venues had inquired about hosting the series.

“I am pleased to present the largest calendar we have ever had in Formula 2, with 14 rounds and 28 races. This results from a strong will from our stakeholders to have F2 race alongside as many Formula 1 Grand Prix as possible.

“A lot of circuits have expressed their interest to have our championship added to their race weekend programme, but for costs reasons, we cannot increase the number of rounds more than we already have.

A record-breaking 14 rounds of action ?

Making a debut at Imola and Zandvoort ? 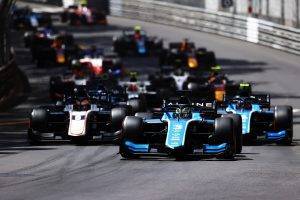