Formula 2 Chapter Comes to a Close for Vips

Formula 2 Chapter Comes to a Close for Vips

Jüri Vips’ chapter in the FIA Formula 2 Championship has come to a close. The Hitech driver has confirmed that he will not be driving in F2 next season.

“I’m very sad to leave them [Hitech]. I do wish them all the best for the future, and I’m sorry for them as well for how the season has gone.”

Vips’ on-track fortunes have been mixed this season. Starting off well with back-to-back podiums in Bahrain and Jeddah, and a P3 and P2 in Monaco and Hungary, the Estonian dominated the Baku Feature Race, leading from his Pole position start. In the final few minutes he clipped the barrier in the Castle section, agonisingly ending his race win hopes.

“It’s definitely been very tough, both on and off the track. I think in the second half of the year, from my side, I wasn’t performing quite as well as I was in the earlier part. I don’t think the car was that much worse. But there were some races also where we struggled a bit more than we did earlier on.”

“There were too many mistakes, especially from my side, and a couple from the team as well, for us to finish higher.

“Without the mistakes, we would have easily been second in the Championship. I don’t think we had the pace to win but it’s one of those seasons.”

Vips’ was fortunate to continue the season despite an off-track misdemeanour. The Silverstone based team continued to support him during, and after, the event, with Team principal, Oliver Oakes, stating at the time that, “I believe we all deserve a second chance in life.”

Talking exclusively to insideF2 from the Yas Marina Circuit, Vips’ in gratitude, said:

“I’m very thankful to Hitech for giving me first chance, and then a second chance as well to keep competing.”

“I’m still working on plans for next season, but nothing at the moment is clear. I’m all done. I won’t be here for the test. I’m flying back tonight.

“The F2 chapter is definitely closed but hopefully I’ll still have some years in me to get a proper career; at the moment I’m working on that.”

All of us here at insideF2 wish Jüri the best of luck in his future endeavours and hope to see him on a race track soon. 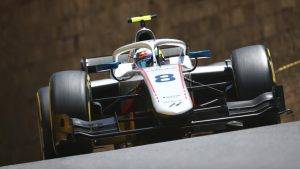