Formula 2 Testing – What Did We Learn?

Formula 2 Testing – What Did We Learn?

What did we learn from Formula 2 testing

It’s the time where the talking stops and whilst many speculated whether F2 would be racing or not in Bahrain in two weeks time, the eleven teams and twenty-two drivers got done to the serious business of testing.

Bar Christian Lundgaard who was held in quarantine at a Renault training camp in Spain,  twenty-one drivers who are on the entry list for the 2020 grid took to the track to get as many miles as they could over three intense days of track action before the opening round of the season.

So what have we actually learned?

After 964 laps, here's the standings after Day One of #F2 Testing#RoadToF1 pic.twitter.com/bkQ1zpAP5L

Daruvala the dark horse for the championship?

Although the deal came about late with Carlin, Jehan Daruvala has so far shone in testing as the Indian was fastest overall on day 2 of testing.

Daruvala was also consistently in the top 10 of the timesheets throughout the sessions with the Indian third on day one ahead of former Prema teammate and defending Formula 3 champion Robert Shwartzman.

With Yuki Tsunoda struggling for pace it would seem that Carlin would put its eggs into all one basket and give the Indian driver their full support in his bid for the championship.

The rookie on top ?

Jehan Daruvala stormed to the top of the timing sheets in the Bahrain dessert ??#F2 #RoadToF1 pic.twitter.com/wgv6Roh6a6

The final day of testing saw our fastest laps ??

Ghiotto fast out of the gates

Although he was ready to wave goodbye to pastures new, Luca Ghiotto is back for another crack at Formula 2 with Hitech Grand Prix with the Italian teaming up with Russian Nikita Mazepin.

Despite starting the programme late Ghiotto and Hitech have been quick from the trap with the twenty-five-year-old setting the fastest time of the final day of testing as well as finishing second in the morning session behind Mazepin.

Although the Italian may be slightly tired due to his sports car commitments that he will combine with his F2 programme, it would be bizarre not to think that Ghiotto could be a serious contender for the championship at the fourth time of asking.

The reigning constructor’s champions are in a slight panic after what was a mixed test session for the Le Mans based team.

Their new driver line up of Dan Ticktum and Sean Gelael caused tongues to wrangle before a wheel had been turned, and with the results of last week, nothing to ride home about it may cause the tongues to continue to wrangle.

With Gelael managing a best finish of sixth on day one and Ticktum eighth on day one, it could be a rebuilding season for DAMS unless a huge charge in form happens at the first weekend in Bahrain.

ART on the back foot

Although it was unpreventable, the loss of Christian Lundgaard for the three days of testing after being quarantined in a hotel on the Spanish island of Tenerife couldn’t have come at a worse time for the four-time constructor’s champions as ex Williams driver Sergey Sirotkin had to sub in for the test session.

It puts both Lundgaard and ART at a major disadvantage for Bahrain as the Dane will have had less time to learn the car or get the laps he needed to learn the Bahrain International circuit.

It wasn’t all complete doom and gloom for ART as Marcus Armstrong fifth in the afternoon of day one showing that the Villeneuve-La-Guyard based team does have pace albeit for only one of their cars.

Reasons to be cheerful at Trident

The past two years have not been kind for Trident with a merry go round of drivers and the everlasting struggle to get into the points will be a challenge once again but 2020 could be very different.

Unlike previous seasons there are reasons to be hopeful at Trident as the new lineup of Roy Nissany and Marino Sato have been right in the thick of the pack as the pair have been rooted to the mid-pack of the timesheets whilst Sato has impressed after the Japanese driver who had a brief spell at Campos finished seventh in the timesheets in the first session of day two. 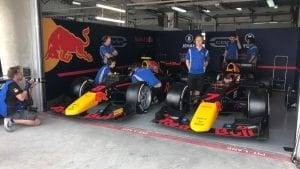