Frederik Vesti Has What It Takes to Succeed With ART

Frederik Vesti Has What It Takes to Succeed With ART

ART Grand Prix team Principal Sébastien Philippe, believes Frederik Vesti, has what it takes to succeed with the team in the FIA Formula 2 Championship.

“The first year of the partnership was fruitful for both sides with several podiums and a win that saw Fred end the year in 4th place with a total of 17 top 10s in 20 races. Some details kept him from fighting for the title, but we know he has what it takes to do so.”

The 2021 Formula 3 Championship ended with Vesti finishing in P4 after a race win at the Red Bull Ring, and four podiums at the Circuit de Catalunya, Austria, Zandvoort and Sochi. It was a tightly fought championship, that saw his new ART teammate, Théo Pourchaire, come a close second the previous year.

The Dane jumped into the team’s Formula 2 car for the post-season test in Abu Dhabi in December – His highest result on the timing sheets was a P9 on the afternoon of Day 1.

“After two years of F3, the logical continuation of our collaboration goes through F2. The offseason testing has met our expectations and in 2022 we will aim to fight at the forefront.”

Over the 2019 Formula Regional Championship, Vesti scored an impressive 467 points with the PREMA Powerteam to become Drivers’ Champion – an outstanding 132 points ahead of second placed, Enzo Fittipaldi. His results included 20 podiums, and 13 race wins.

The switch to ART in 2021 and the promotion into the team’s F2 car is pivotal to what happens next on Vesti’s #RoadToF1:

“To sign my FIA Formula 2 contract with ART Grand Prix is a big thing for me,” said Vesti. “We worked incredibly hard in F3 last season and to continue the progress into Formula 2 together is important for my next step.

“Now it is crucial to understand all the small details of Formula 2 to achieve the maximum in 2022. Testing in Abu Dhabi went really well, and I learned a lot of new things. I can’t wait to be in the car for the first test in Bahrain! I want to thank ART Grand Prix for this great opportunity and for believing in me.”

With Trident, Charouz and Campos still to announce their complete lineup for 2022, who would you like to see driving in Formula 2 this season? 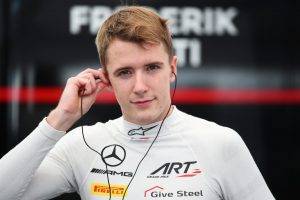