FIA Formula 2 driver, Frederik Vesti, is a man on a mission; to highlight his talent and hard work, that could rubber-stamp a future Formula 1 career with the Mercedes-AMG PETRONAS F1 team.

With a determined approach just a few seasons ago, the ART driver explained how for all the right reasons, he grabbed the attention of the Brackley based team.

“It all started back when I was in F4. I got the email of Gwen Lagrue who is the head [Director] of the Mercedes Junior team. I pretty much sent him an email after each race weekend; Both when I won and also when I lost, and I think that was probably a bit of a different approach to most drivers who tried to promote when they’re going well and probably forgetting a bit when they’re not doing well.

“I really tried to show who I was and how I was building myself into becoming the driver I want to be in the future, and that sort of opened up a conversation with Mercedes.”

Standing out in the 2019 Formula Regional European Championship with no less than 13 wins out of 24 races, including a total of 20 podiums, and scoring points in every classified race that season, the man from Denmark continued his outstanding form into the Formula 3 Championship, with three race wins in his rookie season. The Dane equalled his previous season’s P4 finish in the 2021 Drivers’ Championship, only dropping points in three races.

“It took another one or two years to really convince them, and also to show my worth, because Mercedes is not any junior team. They have some very very strong records of getting their junior drivers into Formula One and they take time to choose.”

Vesti is of course referring to drivers of the highest caliber, such as seven-times World Champion, Lewis Hamilton, 2016 Champion, Nico Rosberg, and arguably the greatest rookie since Hamilton, George Russell, among many other drivers who made it into Formula 1 because of the ART team and their Mercedes connection. The French based outfit also made GP2 and F2 Champions out of Nico Hülkenberg, Stoffel Vandoorne, and Nyck de Vries.

“I started as a junior driver last year, and signed for my last year of F3 with ART, together with Mercedes, and it’s just been great since.

“I have learned so much and I’m doing a lot of simulator with them and it’s a new and different world where I can learn a lot [and benefit] in F2 as well, so it’s really helpful.” 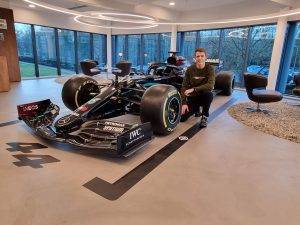