Friendships and Rivalries in the Formula 2 Paddock

Friendships and Rivalries in the Formula 2 Paddock

In the pre-Barcelona driver Press Conference, I asked FIA Formula 2 drivers, Clément Novalak and Jack Doohan about the friendships forged in the paddock, during a drivers motorsport career.

In 2021, both were Trident team mates in Formula 3, finishing a close second and third in the Drivers’ Championship, and winning the Teams’ Championship.

“I can say we’re mates for sure but last year we were rivals as well. We were fighting race in race out. We were very close, right until the last round. Either of us could have been P2 or P3 in the Championship.”

The juxtaposition doesn’t appear to be a conflict:

“Like any close team mates, whether that’s in Formula 1, Formula 2 or Formula 3, there’s a difference when there’s a pace difference. But when you’re racing, that’s your competitor for pole positions and unfortunately you’re there to basically do business. You’re there to do the job and be the best in the team, and that’s what you want to do.

“Any driver who says otherwise, that’s not right, not for me.

Noting recently how much the drivers congregate and chat casually in the Formula 2 paddock between sessions, I put the same question to Novalak:

“It’s true. In the end we’re here to do business. I think the friendship through most drivers that you see in the paddock, in the sense that you see we talk to each other, is that most of the time, we’ve probably spent our whole childhoods together.

“I can tell you a lot of guys in the paddock that are here today were around in the Karting internationally, around the ages of 11, 12, and 13. We’ve all had the same lives, and I guess that’s how we all understand each other, from our experiences.

“When the helmet comes on, everyone is down to themselves, and you’re trying to do the job. Everybody says that the moment the helmet goes on, the friends go away, and it’s kind of true.”

On social media, Novalak comes across as fun and relaxed, and it can be said that he and his MP team mate, Felipe Drugovich, may be enjoying a ‘Bromance’…

“As for Felipe, we were good mates, and we [still] are good mates. We were team mates I think when we were 13 or 14 years old in Karting. He’s a really top guy. Away from the track we’ve had a lot of fun and contact. It’s just nice to have him around.

“Put it this way, he makes the weekends a lot more fun in the off time.”

For the amusement and enjoyment of Formula 2 fans, long may it continue! 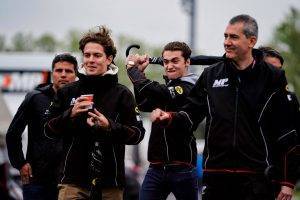