Frits Van Amersfoort spoke in-depth to insideF2 from the paddock at Yas Island, summarising the team’s inaugural FIA Formula 2 season in a nutshell.

Frits is a Team Principal who’s been visibly present from dawn ’til dusk in the VAR garage; Working tirelessly throughout, from his arrival, until every piece of equipment is packed away, signifying the end of the Formula Two season.

“Of course, why not?” Frits responded candidly to insideF2’s observation of his physical contributions.

The tall, commanding, yet gently spoken Dutchman, has a huge presence in the pit lane and paddock, being hands-on at every opportunity, even pushing his car’s out from their pit box, as they leave for a lap or two of the Yas Marina asphalt.

This time last year, Van Amersfoort took over HWA Racelab’s garage, and set their Formula 2 stall out for the first time in the team’s history. Frits talked through the year as it happened, exclusively to insideF2:

“The beginning was like always in the beginning, very difficult. We started well, but we were disqualified for a plank that was too thin in Bahrain.

“We had some problems with Amaury [Cordeel] a lot of penalty points and mistakes also by other drivers. Let’s say before the summer break it was really hard. And then me and Rob and also Peter and my engineers, we all sat together and we said, ‘we have to do something.’ And that sounds maybe horrible, but we had to offer to replace Jake, as it just didn’t work in the team.

“It doesn’t mean that Jake did a particularly bad job, it just didn’t match. Much to blame on our side, maybe also a little bit on Jake’s side, but like a marriage, it didn’t work, and then you have to divorce, and that’s the reality; So we replaced him with David Beckmann. In the beginning it was difficult because he replaced Amaury when he was banned for the Silverstone race. I know David, and we kept him, and I think after the summer break it went a lot better.

“From Spa on I think things started coming together and the results came. Not on the podium, and not race wins, but at least coming back from the last few positions. Especially Zandvoort went pretty well, we had both our cars in the top, and we kept on going like this.

“So, we came here, and of course remember here, because we took it over last year, and we spoke together didn’t we?

“What started in Spa and went through Zandvoort and Monza we saw it coming together for Amaury, because he did two fantastic races and everybody who knows something about racing and something about sport knows that when things go the right way the whole team is getting more motivated. The joy in the team comes back and everybody starts being happy. And that’s how we finished the season; We took that happiness into the test week.

“That’s basically in a nutshell how I saw this season.” 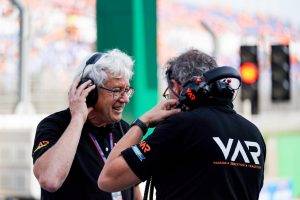