Frustrating Weekend for Hauger in Spa

Frustrating Weekend for Hauger in Spa

PREMA driver Dennis Hauger continues with his frustrating recent results. In the eleventh round at Spa, the Norwegian driver struggled to perform well.

During qualifying, Hauger finished in eleventh place with a time of 1:59.161, despite this time not being bad, it wasn’t enough to satisfy the Red Bull junior, as he described this qualifying session as a “hard pill to swallow”.

“We had decent pace with Set 1 but struggled to make the tires work on the last, and it’s disappointing to just end up outside the top 10” said Hauger. The 19-year-old’s team mate, Jehan Daruvala, finished only two positions in front of him with a time of 1:59.114.

Saturday’s Sprint Race became a challenge for Hauger, he was in full focus mode; however, he had pressure and didn’t want to fail. Nevertheless, the driver could finish the race in 10th place, which means he wasn’t given any points this round.

The PREMA driver stated his effort in bringing in points for his team, but the pace of the car made matters difficult: “Tough race overall, I tried to give everything I had, but we were just lacking a bit of pace. We could hang on the prime but going to options we were struggling” shared Hauger.

For Sunday’s Feature Race, something similar happened, where Hauger came close to scoring points, but failed to do so once again. Finishing the race in twelfth place, the Swedish driver expressed positive thoughts despite his discouragement after trying his hardest all weekend long, and seeing no outcomes from his attempts.

“Although the result today wasn’t the best, I still felt there were some positive things to take. Compared to yesterday we made a step with the softs. We still struggled a bit with the mediums in the end especially, but otherwise, I felt there were steps made and things we can definitely bring to next week” Hauger gives feedback on his first experience in the Spa-Francorchamps track as a FIA Formula 2 driver.

“It was a decent race, I tried to keep it clean and do the best job I could. Now we have something we can take and move forward.”

The season will continue in Zandvoort next weekend, then Monza the following weekend. Hauger will have enough time to work things through with his car up until the next round. 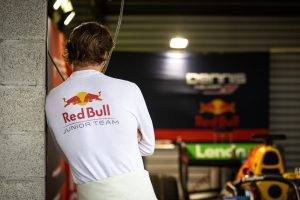