Jack Doohan made an incredible start in the FIA Formula 2 Feature Race in Le Castellet last time out, going ‘full throttle’ to gain as many places as he could.

The Virtuosi driver found he had a massive amount of grip compared to the others on the race start, and instead of having to balance wheel spin with acceleration, Doohan was able to push hard, to gain three places, going from fourth to P1 by the first turn.

“I think we just got it right on the day, with the conditions, and the mapping.

“The start just came together as I think it does sometimes. Logan [Sargeant] had a bit of wheel spin off the line up in pole, and it was the perfect start [for me] which was able to come together.”

Working his way back up the order after the pit stops, Doohan made a bold move on ART driver, Frederik Vesti on Lap 15 for P7 and a potential podium place. Next in line was Vesti’s teammate, Théo Pourchaire. On Lap 19, Doohan went for the move under braking but spun and lost the opportunity to lift a second-placed trophy, settling for P5 as Vesti and MP Motorsport’s, Felipe Drugovich, jumped ahead.

“It was a bit of a silly move that happened down in the Mistral Chicane. A little bit under braking I got squeezed and I decided I didn’t want to have contact so went over on the inside kerb – I lost the car. A mistake on my side, and it was a hard one to take. But I’ve learned from it, and we evidently just kept going and got some points; but it was a disappointment to miss out on the podium on that one from my own doing.”

Finishing third at the Hungaroring in Race 3, in the Formula 3 Championship last season, Doohan will hope to continue where he left off, and improve on his current sixth place in the Drivers’ standings. 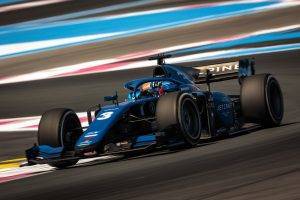