Dan Ticktum celebrated on the top step of the podium today, in the FIA Formula 2 Sprint Race at the Sochi Autodrom.

Managing his tyres and carbon brakes on a slippery, cold track, the British driver was in control from the start, showing what a master in wet conditions he can be.

“I was on a damp track on slicks, and was setting the reference point from the lead.”

Ticktum maintained his reverse-grid pole as the drivers sensibly stayed on the drying race-line, not daring to go onto the damper areas for a risky overtake.

Felipe Drugovich and Guanyu Zhou, retired on the original Formation Lap as the Brazilian driver spun and crashed into the wall, and title contender, Zhou spun and retired, before they’d reached their starting positions.

” You could see how difficult it was with cars crashing on the way to the start.

“It was a lot of stress. I was pretty scared.”

Post-race, the topic swung to Ticktum’s future in motor racing. The Brit hasn’t yet announced a place in any series next season.

“It’s either IndyCar, DTM or F2 or Formula E, those are going to be the options and those are the places I’m going to be looking.”

Whilst other great drivers were spinning, sliding and leaving the track today, Ticktum kept his head and drove a masterclass to once again finish on the podium.

“I’m a good driver, but am I fast enough? Talented enough? Mentally capable to be in F1? Yes, the answer is simple.

“Am I too politically incorrect in the environment we’re at in the sport? Yes, or I have been. Let’s put the emphasis on the latter [laughs].”

“You’ve got to represent massive companies, and you’ve got to be a robot, basically. So, if you have someone whose got a bit of a character, not even just an opinion, but someone who tells the truth sometimes can get you into trouble.”

The Brit is candid and speaks from the heart, and this reflects in his driving style, which shouldn’t be extinguished, but honed.

“I’ll speak for all drivers, some care more than others, some just get on with it. Some Formula One drivers would like to be themselves a bit more and say things other than, ‘We’ll work harder next time, and come back stronger.’

“I think the fans would like someone who’s a little bit different.”

Regardless of what Ticktum says off track, his talent speaks volumes on it. He has another opportunity to impress tomorrow, and stamp his mark on the sport. 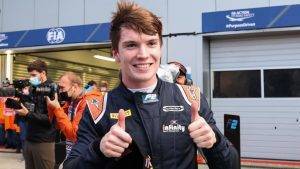