Joel Granfors maintained his GB3 championship lead by half a point lead after Race 1 at Brands Hatch despite being beaten by his title rival Luke Browning.

Granfors assessed the first race of the weekend and his first lap battle with Browning and Rees.

He said: “We started P2 and jut got a poor start off the line and Luke and (John) Bennett just passed me going down to Turn 1 and then they started scrapping it out going into Turn 2 so I just used that to my advantage and overtook Bennett.

“Then it was close between me and Luke, I think it was three turn s in a row we were side by side, so I just tried to go round the outside in Turn 3 but I just knew he was going to push me off if I stayed there so I backed out and went for a good exit and I think I got a decent exit.

“He had to defend into the next corner and then it was just the same thing again, he got a poor exit and I got a good one. And then we were side by side into Turn 5 but after that I knew it was going got be really tough to overtake.”

The Swedish driver also lamented the difficulty of overtaking at Brands Hatch.

“I needed him to do a massive mistake to get by especially with Luke and Rees I know they are equalling quick I would say so it’s just tough to overtake on this track you really need someone to make a huge mistake.”

Browning drove to second place in a rain affected Race 1 for Hitech and explained that despite light rain falling the track grid wasn’t drastically affected.

“There was a dramatic decrease (in grip) for one lap just at one corner or another corner it was quite sporadic.

“But it was manageable and when the tyres are up to temperature like that as long as there’s not a lot of water to cool them down massively we’re all good. So it seemed to be fine and luckily it didn’t cause any crashes out there.”

The Canadian is delighted to be working with Aston Martin and said: “I absolutely love it, it’s fantastic, It’s everything I’d hoped for to be working in F1 and more.

“The guys and girls that I work with are great fun and it’s long hours, a lot of hard work but it’s absolutely worth it. “So to be supporting the cars over the race weekend is just the coolest thing ever and I really really love it.” 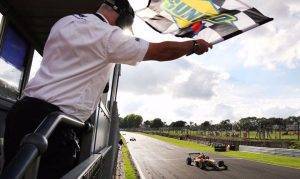