Luke Browning won the GB3 championship after driving to second place in Race 2 at Donington Park.

The British driver also earned an FIA F3 test as a prize for winning the title.

Browning scored five wins over the season for Hitech GP on his way to the title after a fiercely contested championship battle with Swedish driver Joel Granfors.

The 20-year-old explained after his title win: “That was amazing, absolute elation and I couldn’t be more happy.

“All the hard works paid off, that was a bit of a chaotic race, it was all chaos in the start.

“I thought it’s going to be a lot about tyre management so I backed it off a bit and luckily just started picking people off towards the end and finished off P2.

“I think the guys behind were catching quite quickly on slicks so the crossover point was well and truly there but we just nailed it.”

Granfors slumped to a P13 finish in Race 2 after an amazing start which saw him go from fourth to first before Redgate on Lap 1.

The Fortec Motorsport driver explained his race and the excellent start prior to suffering from oversteer on wet tyres as the track dried.

Granfors said: “We had a decent race, the first couple of laps. The start was good I overtook three cars up into the lead and then the car started to oversteer.

“I don’t know if it’s mean that overstressed the tyres or something but towards the end it was almost undriveable.

I had to steer the opposite way to where the corner was going, it would’ve been nice to take the championship battle to the last race but it is what it is.”

In the third and final race of the weekend, Nick Gilkes took his sole win of the season for Hillspeed in the reverse grid race.

The Canadian finished ahead of Cian Shields and Alex Connor in the last race of the year.

Gilkes said: “It’s been a long season, everyones been working really hard and i’m so happy for the team that I could deliver his result that they deserve, they’ve worked really hard this year and they deserve it.”

The Hillspeed driver also shed light on his plans for 2023: “If I can put the budget together for another year (in GB3) I’d love to do it.

All Interviews from Sundays GB3 action 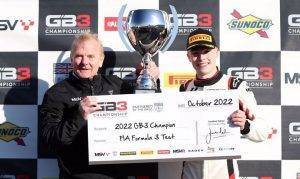