Luca Ghiotto hit the ground running with the fastest time of the Formula 2 Practice session in Sochi despite a late spin which brought out the red flags.

The session began in glorious sunshine with temperatures in the 20s at the former Olympic park on the Caucasian Riviera.

Giuliano Alesi and Jake Hughes would get their first laps in their new cars with the Brit making his Formula 2 debut after a long spell in Formula 3, whilst Alesi would be replacing longtime F2 veteran Nobuharu Matsushita who left the series earlier in the week.

The opening minutes of the session saw Carlin have a clean sweep of the top of the timesheets with Jehan Daruvala and Yuki Tsunoda setting the opening benchmark of 2:06.227.

Daruvala and Tsunoda continued their reign at the top with their second laps with Daruvala setting a 1:50.389 half a second ahead of Tsunoda.

Robert Shwartzman had an early scare with a small spin at the last corner which the former Formula 3 Champion quickly gathered together and resumed his session as fellow Ferrari junior Callum Ilott had a brief trip on the runoff area after spotting Guanyu Zhou late on his fast lap.

Ghiotto was the first driver to break into the 1.49s with a 1:49.8 to put him at the top of the times briefly as Daruvala went fastest in all three sectors by just under a tenth of a second.

The Italian then bettered his time to produce a 1:49.6 to beat Daruvala by over a one-tenth of second to put the Italian back on top of the timesheets ahead of Daruvala and his Hitech teammate Nikita Mazepin who was three-tenths behind.

Ilott moved himself up into fifth in the timesheets with his time of 1:49.9, with the Brit’s fellow championship contender Christian Lundgaard pipping him for fourth-fastest by just a tenth.

Tsunoda moved back up to second with the Honda junior driver just +0.081 behind Ghiotto as the Japanese driver hoped to top Practice for the fifth time this season.

Championship leader Mick Schumacher had a low-key start to the weekend with the German down in eighth place, seven-tenths behind the pace sitter Ghiotto.

Marino Sato had a difficult start to the Practice session after coming to a halt on the exit of Turn 2 which brought out the virtual safety car as the Japanese driver climbed out of his car bringing an early end to his session.

Shwartzman’s troublesome start to the weekend resumed with the Russian stalling in the pit lane causing his PREMA mechanics to quickly refire his car up at the exit of the pit lane.

The session was red-flagged with a minute left to go after Ghiotto spun at the last corner before stalling on the start-finish line, bringing the session to an end.

Despite that spin, Ghiotto remained fastest ahead of Tsunoda and Daruvala with Lundgaard, Ilott, and Mazepin completing the top six.

Pedro Piquet was an impressive seventh ahead of Schumacher and Marcus Armstrong,, with Dan Ticktum 10th.

Felipe Drugovich and Shwartzman were just outside of the top 10 in 11th and 12th with Jüri Vips and Zhou 13th and 14th.

Sato was 15th ahead of the two Williams juniors Jack Aitken and Roy Nissany.

Alesi was 18th in his first session for MP Motorsport ahead of former teammate Artem Markelov and debutant Hughes, with Louis Delétraz fresh from Le Mans, and Guilherme Samaia completing the timesheets. 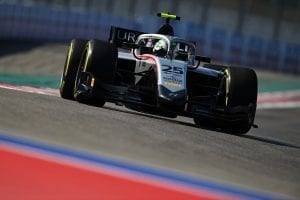