Luca Ghiotto produced a masterly drive to win the Formula 2 sprint race in Hungary. Ghiotto made use of a zero-stop strategy to hold on from Callum Ilott.

Polesitter IIott got away well and was created a gap whilst Hitech’s Ghiotto and Louis Deletraz battled.

Mick Schumacher, high on confidence after Saturday’s podium, passed Dan Ticktum for fifth place. Ticktum was soon complaining over the radio that he was losing power making him a sitting duck.

Ticktum’s day quickly got worse as he slowed and was forced into retirement.

Schumacher continued his pace, setting the fastest lap as he overtook Nikita Mazepin. The PREMA star was once again showing good pace on his most successful track in Formula 2.

IIott reacted to Schumacher’s pace, taking the fastest lap as he held the gap to Ghiotto.

Schumacher passed Deletraz for third around the outside into turn one, with the Swiss’ tyres past their best.

Deletraz’s pace continued to suffer as he was passed by Mazepin. He was quickly into the pits for new rubber.

Upfront Ghiotto had cut the gap between himself and IIott down from four seconds to just over two seconds as the Brit’s tyres began to fall apart.

Schumacher was first of the top five to pit for tyres, setting off a chain reaction of stops.

IIott was in next to change tyres with Shwartzman following the leader for a set of fresh softs as well.

Upfront Ghiotto was over 25 seconds clear as Hitech made the decision not to pit the Italian.

IIott looked to hunt down Ghiotto, looking to close a 22 second gap with five laps to go.

Schumacher produced two great overtakes as he passed Deletraz at the final turn and Alesi on the pit straight.

Deletraz was now falling back again, passed by both Shwartzman and Mazepin.

IIott was cutting through Ghiotto’s lead by four seconds a lap, with UNI-Virtuosi encouraging their driver in the dying laps.

It all came down to the last lap as IIott closed the gap to just over a second as they reached the final sector.

Unfortunately for Ilott it was just too late as the Italian just hung on to win his first Formula 2 race since Yas Marina 2019.

The victory was Hitech’s maiden win, ahead of IIott and Schumacher.

Shwartzman was fourth ahead of Mazepin and Deletraz with Jehan Daruvala and Guanyu Zhou rounding off the top eight.

Shwartzman still holds the championship lead with 81 points, ahead of Ilott on 63. Christian Lundgaard’s nightmare weekend sees him lose touch with the front two, with Schumacher and Ticktum completing the top five. 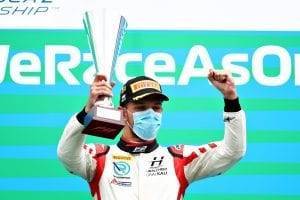