Luca Ghiotto’s home weekend at Monza saw him undertake a strong recovery drive to finish second in the Feature Race.

Lights out saw the Italian driver struggle with a poor getaway to drop from third on the grid to sixth. Speaking about the start, Ghiotto said: “Basically, at the start of the formation lap I almost stalled. I think went a bit too aggressive on the clutch.

“I had the same feeling at the start of the race, so I was trying to recover from that and then I got wheelspin, which got even worse on that side. I had no traction and I lost one or two places to Christian and Mick of course.”

The Hitech driver also suffered further difficulties due to a radio issue. As a consequence, he was forced to go longer in his first stint than was planned.

When asked about the tyre situation, he said: “Well, the pace was decent still on the options. I think I was not more than seven or eight tenths slower than the guys who pitted. But still, that’s enough to lose some time. Stopping probably three or four laps earlier would have helped.”

However, after his pit stop Ghiotto battled his way up the grid to take back his starting position of third with three laps remaining. He then worked on closing the gap to Christian Lundgaard in second, before making the move and diving past the Danish driver in the closing stages.

Despite the tyre strategy not being ideal in the first stint, the newer tyres helped him make the most of the latter half of the race. He said: “luckily we had a really good pace at the end, and probably the newer tyres helped me catch up to Christian and getting P2 at the end. It’s just a shame that the race finished a bit earlier because I saw I was catching up to Mick.”

The chequered flag saw him finish 3 seconds behind race winner Mick Schumacher, but considering the difficulties at the start, the Hitech driver can be proud of keeping it clean on a track that caught out some of the drivers around him.

Additionally, Monza seems to be somewhat of a favourite track for the Italian driver; he’s appeared on the podium there in three out of his four seasons in Formula 2. He’ll be hoping this run of luck continues to the Sprint Race tomorrow and with the Temple of Speed being a challenge for the whole grid, could hometown glory be on the cards? 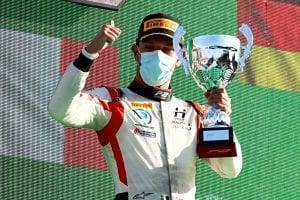