“Good end to the weekend” for Carlin

“Good end to the weekend” for Carlin

Yuki Tsunoda took a maiden victory in the Silverstone Formula 2 Sprint Race. The Japanese driver took advantage of a clash between the PREMA drivers to sneak through for P1.

It completed a great turn around after qualifying 10th and a good drive to sixth in the Feature Race.

Yuki Tsunoda said: “Yes I am very happy for that, the first P1 of the year. The tyre was still there at the end, I had the confidence in the last laps that I had a good chance of P1 even if they had not collided. Anyway, we had a little bit of luck and didn’t have to put in a lot of effort to overtake them.

“It was a good end to the weekend, very good. The pace was OK from the start but not great, missing a bit actually. In qualifying, I felt quite good about my lap, but there was a bit missing in the pace. We don’t really know why yet, but that is something we have to improve for Barcelona. I think that was the only thing this week that wasn’t quite right and that made Race 1 a bit difficult. We could improve Qualifying to have a better result in Race 1.

“The Carlin car is always good in the race, and we have a good strategy, and we are able to manage the tyre. We gained quite a few positions with our pitstop. Actually, after that, I had a little misunderstanding with my engineer as he wanted me to push and make a gap from those behind but in the end we lost the tyre a bit and I could not push at the end. But we still did OK, and P6 was not too bad and a good position for the reverse grid today. That was experience and 100% sure that learning from that experience gave us the result today.”

Jehan Daruvala also suffered in qualifying, finishing the session down in 16th. But the Indian driver put in two good drives, finishing 12th in the Feature Race and ninth in the Sprint Race.

Jehan Daruvala said: “It all went wrong in qualifying really. I was on a very good lap, made a big mistake and got massive oversteer that cost me a lot. Then the following lap, I was 3/10ths up in the first sector, but the Dams car was spun in the middle of the track, and that was the end of it.”

“Very frustrating really, both with myself for making a mistake and for the bad luck of not having another crack at it. With a clear lap, the pace was good enough for the top 5 or 6, and that would have made a huge difference. You can’t start back on the grid and expect a good result.”

“The positive is that I had two good starts so that issue has been overcome and we just need to get back to qualifying where we were earlier in the year. In Race 1 the guy in front stalled, so I lost out a bit going around him but managed to make up some places. In Race 2, I pushed hard to catch the group in front, but that cost a lot with the tyres and made it tough towards the end of the race. There is such a narrow window to work in with the tyres and if you have given yourself a disadvantage with the grid position you are really up against. Still, we can qualify well, so we have to do that in future.”

Carlin will want to keep up the momentum when Formula 2 heads to Barcelona. 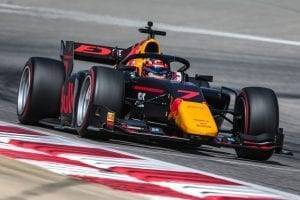