If recent media reports are to be believed, we could soon see Formula 2 driver Guanyu Zhou take Alfa Romeo’s second Formula 1 seat alongside Valtteri Bottas for the 2022 season.

There are currently a number of reports circulating the Chinese driver’s future after he emerged as the favorite for the remaining seat in the Swiss based team.

According to Italian media, Alfa Romeo are waiting on the 22-year-old to earn his Super License.

Zhou is currently on 29 of the 40 points required for the super license after finishing seventh and sixth respectively in previous F2 seasons. After winning the Asian Formula 3 Championship earlier this year, the Alpine Academy driver earned another 10 points.

At present, the UNI-Virtuosi Racing driver is holding second place in the F2 drivers’ championship which will give him enough points to earn his Super License according to the FIA’s International Sporting Code, Appendix L, Article 5 .

Other reports suggest that the deal is yet to be completed as Zhou is not happy with a one year contract, which is apparently all Alfa Romeo’s Team Principal Frederik Vasseur is willing to give. This is a result of Vasseur’s eye set on Sauber Academy driver Théo Pourchaire being the team’s future.

If the Shanghai born racer’s talent is not enough to persuade the Alfa Romeo team, his potential marketing opportunities might. If Zhou is successful in his bid to reach F1, he would be the first Chinese driver to start a Grand Prix, Ma Qing Hua being the last Chinese driver to get close to claiming a seat.

This along with the reported proposed sponsorship package of $30 million could be enough to influence the Swiss based team’s opinion.

Vasseur has recently admitted that Zhou was one of a number of drivers that the team are considering.

Speaking to the media in Monza last weekend, Team Principal exclaimed,
“Zhou is doing a good job in F2”, while adding “For sure he’s on the list” when asked about potential drivers.

Zhou is no stranger to F1, partaking in a number of test outings with the formerly known Renault F1 Team, as well as participating in the Young Drivers’ Test at the end of 2020, beside two-time world champion Fernando Alonso. The 22 year old has also driven for Alpine in Austria during the FP1 session.

The next round of Formula 2 is in Sochi this week before another break until December.

Let us know what you think Zhou’s chances are of reaching F1 on Twitter. 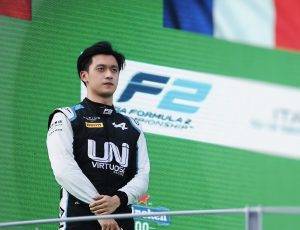