The event was run with the slogan We. Race. On and it was meant to act as an official (but not too official) substitute to the real F1 Bahrain Grand Prix.

The invitation to the race was extended to many prominent personalities in the worlds of both motorsport and esports. Current F1 drivers Lando Norris and Nicholas Latifi (current F2 vice-champion) were accompanied by the likes of Nico HÃ¼lkenberg, Stoffel Vandoorne, and Johnny Herbert. The other F2 driver involved in the race was Robert Shwartzmann, driving for Ferrari as part of their Driver Academy.

We hoped that this kind of event would happen and we still hope more and more current F1 drivers will join the next events.

Qualifying took place with a short 18-minute session, with pole position going to an inspired Philipp Eng (BMW Motorsport works driver). Zhou qualified in P3, behind Esteban GutiÃ©rrez and ahead of Latifi.

Streamers favorite Lando Norris (Check out the below of Lando calling Max Verstappen to explain what happened) and Jimmy Broadbent (widely popular Youtuber in the sim racing scene) did not manage to put in a qualifying lap due to technical issues and started from the back of the grid.

To say that the start was chaotic is an understatement. There was a big crash just off the line, involving Nico Hulkenberg and the Ferrari of Dino Beganovic, and other contacts followed soon after that.

This probably inspired F1 race winner Johnny Herbert to brake early and completely cut Turn 1 and join the race track in the lead of the race. While the movie was very entertaining to watch, it became apparent (if it wasnt already) that a race without stewards can quickly become a . Herbert picked up a 10-second penalty for the corner cut, and eventually finished out of the points in 13th place.

It is difficult to comment on the result of the race with all the glitches, technical issues, questionable respect of track boundaries, and disparity in-game assists used. For instance, Lando Norris lost his connection to the game, and his car was driven for many laps by an AI driver, soon nicknamed LandoBot by the fans.

However, as in real-life racing, the drivers who managed to stay out of trouble eventually managed to achieve the best results. Zhou was one of them. His on-track battle with Eng was fierce but fair, and he managed to come out on top to take the win with some margin.

? Crazy one! So fun @F1 pic.twitter.com/kwvFbwNkEo

Who do you think had the best race? Did you enjoy the Virtual Grand Prix? Let us know in the comments!

Watch the 2020 “Not the Bahrain Grand Prix” below on the Official F1 YouTube channel: 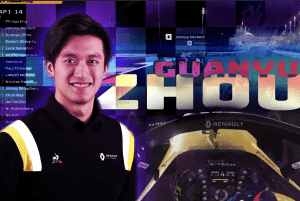