Prema scored two valuable points finishes at the Bahrain International Circuit in the Feature Race to help them claim the 2020 Formula 2 Team Championship with one race left to go this season.

Mick Schumacher managed to retain his lead in the driver ahead of tomorrow’s Sprint Race with a great run from 18th mon the grid. The German got a clean start off the line and gradually started fighting back in the early stages, having opted for the harder prime tyres at the start.

Schumacher constantly improved his position and made the most of the switch to the option tyres after the pitstop. He kept gaining ground and places, eventually finished in sixth. In addition to the points, Schumacher will start the Sprint Race from the second row.

Schumacher said: “What an eventful race this was – we knew it’s going to be a difficult one, and the first lap, starting from P18, proved us right. In the course of that lap, I had several contacts with other cars, and actually, I felt like being more off the road than on the road during that period.

“It was very important to go through this chaotic part and phase, so when finally, I was P3 at some stage I kind of realized that I am now set well to be cool when it was necessary and attack when the moments were right.

“We could have pitted maybe one lap earlier because the warming of the tyres afterwards was a bit difficult, but nevertheless I think the pace advantage with the option tyres worked well for us. The car was supporting me all the way through the race, so I think managing to secure P7 and the way how this was achieved made this race one of the best drives that we had this year.

“I am really happy for Prema, to be Team Champion is great, so we now take these vibes with us for tomorrow’s race, starting from P2. We have the best team, and I am happy to be in the position to finish the race and the season on a high together with them.”

Robert Shwartzman had a great start and quickly moved into second. The Russian was on the opposite strategy compared to Schumacher. After going for an undercut, he eventually dropped to fourth and had to deal with tyre degradation late in the race. Shwartzman still showed good pace and ended up just tenths of a second away from the podium.

Shwartzman said: “Not the best race for me. I had a really good start and managed to get to P2. I was behind Mazepin, but I didn’t find a way past, and at some point, my rear tyres just dropped, so we decided to pit earlier and do the undercut. The pit-stop itself was quite good, and the team did a great job.

“While it was not enough to get ahead of Mazepin, coming to the last corner, I managed to pass him. Unfortunately, I made a mistake and locked the front right, which allowed him to regain the position. I’m sorry for that mistake because if I got in front, I could have kept the tyres better and I could have probably fought for the win.

“I tried to stay close to him and attack, but the tyres dropped again, and I started to lose braking performance. Three more cars passed. I tried my best, but I couldn’t do much because it was very hard to keep the car on the braking lines.

“P5 is definitely not the result I was expecting and knowing we had the pace to win, I’m a bit disappointed, but I’m proud for having brought the team the points needed to claim the Team Championship.”

Prema will be hoping Schumacher will have a good race from the second row to claim the championship at the last race of the season while Shwartzman has a good result to finish his season on a high. 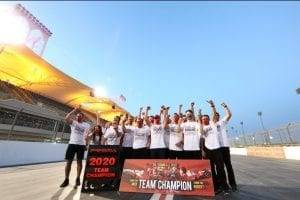