Has Pourchaire Unlocked the Secret to Monaco?

Has Pourchaire Unlocked the Secret to Monaco?

ART driver, Théo Pourchaire seems to have unlocked the secret to Monaco, as he secures second place on the grid in Sunday’s FIA Formula 2 Feature Race.

Last year’s youngest ever F2 race winner dominated the 2021 Feature Race from his pole position, until the chequered flag. And, today the Frenchman secured a confirmed second place on the grid for this coming Sunday’s Feature:

“I will not say the secret for sure! The secret… is a secret. So I will keep that.

“The car is amazing. I would like to thank the team once again because we were very close to that pole. Unfortunately, there was a red flag.

“I’m happy to be P2, P1 of my group, and starting second in the Feature Race is a good place. But we had everything to do the pole today.”

Group A, was the fastest qualifying group overall last season. However, it was clear on the final push lap that Group B could’ve taken that crown this time around, had the Red Flag for Jakes Hughes’ accident not have ended the session prematurely.

“The most important thing is that Jake is fine because I think it was a big crash in the first section. For sure the last lap is always the fastest one.

“To be honest, we were about to go quicker in the last lap. I think we had the track advantage a bit. But it’s like that. I mean, it’s Monaco, and we know that we have a bad position in the pit lane this weekend. We are with Mercedes in the garage, which means that we are last on track. So we are at risk with the red flags and that happened to us today. But it’s okay, P2 is fine.”

The streets of Monte Carlo have never been renowned for plentiful overtaking opportunities. However, what this prestigious circuit has done, is provide race fans and drivers alike with an unrivalled street circuit extravaganza.

“I feel confident on that track. I love driving around here. I think everyone loves this track. It’s very, very good that I’m fast here. I take pleasure driving here.”

Pourchaire is currently 26 points behind main rival, Felipe Drugovich. Despite clipping the barrier and parking his car by the pit wall, before the start/finish line today, the MP driver still qualified in pole. If he’s to stay in contention for the title, Pourchaire cannot allow the Brazilian to extend his Championship lead by too many points:

“We will focus on the Feature Race, we need some good points to catch the Championship leader.” 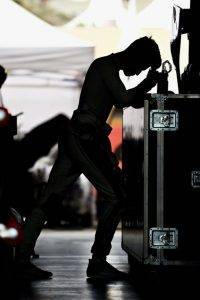