Dennis Hauger brilliantly stormed to his first-ever FIA Formula 2 victory, taking the lead after the reverse-grid polesitter Jake Hughes stalled as soon as the lights went out for the first time this weekend in Monaco.

There was a dramatic beginning at the start of the race as Hughes couldn’t get off the line, allowing the PREMA Racing Norwegian rookie to take the lead of the race ahead of team mate Jehan Daruvala and Hitech’s Marcus Armstrong.

As many expect when racing in Monaco, overtaking was at a premium, and there was minimal on-track action through a largely processional race, with Hauger looking extremely comfortable out front.

MP Motorsport provided much of the entertainment to break up the otherwise relatively flat race, although not in any way that the Dutch team would be happy with as both drivers ultimately retired from the race.

Championship leader Felipe Drugovich gambled on the dark clouds turning into rain on the first lap following an incident that saw the Brazilian with a puncture, and he chose to go out on wets when pitting for new tyres.

The decision did not pay off, and Drugovich soon returned to the pits to switch back to dry tyres but was penalised for speeding in the pit lane. He temporarily retired but returned to the track 5 laps down thanks to a safety car to recover his team mate.

The sister MP Motorsport car of Clement Novalak was left with nowhere to go but the barriers after an ambitious move from DAMS’ Ayumu Iwasa at La Rascasse pushed the Frenchman wide and unable to complete the corner.

The Japanese Red Bull Junior Team driver received a 10-second penalty from the stewards for his involvement in the collision, but there was little impact on the 20-year-old’s day as he was running well out of the points.

With a safety car out to recover the stranded MP car, Drugovich returned to the track and tried to run on wets, but it again didn’t work as the circuit surface stayed dry.

Some confusing radio messages between the pit wall and the number 11 car of Drugovich followed, along with another penalty for speeding in the pit lane before his team put Felipe out of his misery to retire from the race.

Jack Doohan completed the race in seventh, ahead of Carlin’s Liam Lawson, who will try to get his weekend back on track after the post-qualifying penalties have dampened his weekend in Monaco.

Formula 2 will return to action tomorrow at 9:50 AM local time in Monaco, as Felipe Drugovich will start from the pole alongside ART’s Theo Pourchaire on the front row. 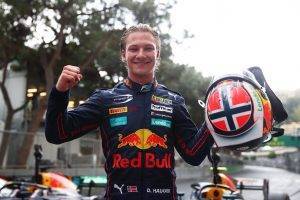