Hauger confident of Monaco pace “to move forward” on Sunday

Hauger confident of Monaco pace “to move forward” on Sunday

After his maiden FIA Formula 2 Championship win in the Monaco Sprint Race, Dennis Hauger says he believes that he has the pace to move forward during the Feature Race.

The Norwegian driver lined up on the front row and took the race lead straight from the start, as pole-sitter Jake Hughes stalled on the line and fell to the back of the field.

The 2021 FIA Formula 3 Champion showed strong pace throughout the race, building a healthy gap to the cars behind during the opening laps. After the Safety Car restart, he managed to pull away once again, eventually winning by over five seconds.

The PREMA Racing driver will start the Feature Race in P9, on a circuit where overtaking is notoriously difficult. However, when speaking during the post-Sprint Race press conference, Hauger said he still believes that there will be opportunities to move up the order:

“We have to stay positive. We had decent pace today. After the safety car, I tried to manage [the pace], so I think we definitely have some pace to try to move forward tomorrow.

“Although it’s really hard here, there’s stuff we can do strategy-wise and possible overtakes as well, although it’s quite hard. We’ll look at data tonight and then we’ll go tomorrow and do the best job we can.”

As well as requiring impressive pace, winning at Monaco demands complete focus from the driver. The Red Bull Junior driver was determined to avoid the walls which threaten to punish any mistakes:

“If you make a mistake here, it costs you heavily, so I just tried to keep it clean… just having a clean start and from then on keeping calm… I enjoyed myself around here.”

The Feature Race could prove even more demanding for the drivers with a chance of rain in the forecast, which could throw a curveball at Saturday’s Sprint Race winner:

“I’ve never been here in the wet – or been here before [at all]! So it’s not easy to just be thrown into in the Feature Race, compared to some of the others. I generally enjoy it in the wet, so it should be good.”

The rookie driver has struggled to get the results that many expected of him so far this season but moves up a place to fourteenth in the championship courtesy of the ten points he earned on Saturday.

With a very competitive grid this year, he will hope to continue his resurgence and move further up the order with the help of a strong showing in the Feature Race. 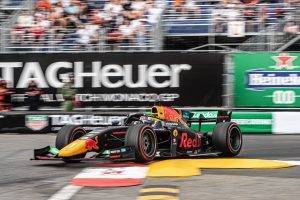