Hauger in ‘Scary Moment’ in Baku

Hauger in ‘Scary Moment’ in Baku

Weaving through the castle section at high speed, Hauger, reacted instinctively, to avoid being collected by Vips, as he crashed into the barrier in the final laps of the race.

Not settling for P2, the Norwegian continued the pressure on Vips, until the Hitech driver clipped the corner, ending what looked to be his third win in the Azerbaijan capital.

“I saw him pushing quite on the edge but I was trying to close the gap that lap, and going into the castle, it’s really narrow. At those speeds you’re just trying to find the margins.”

Vips had led from the start and kept his head in a chaotic Feature Race, that saw three Safety Cars, a Virtual Safety Car, and included a push from teammate, Marcus Armstrong, that could have taken both Hitech drivers out of the race.

“It was really unexpected to be honest, seeing him in the wall.

“I thought he was going over to the left side, after hitting the wall. I was feeling a bit shaken. I didn’t know what to do, but then he slid a bit more to the wall, and I went down the left side.”

With very few options around the old town sector, the PREMA driver had an unnerving front row seat:

“Obviously a scary moment, not really knowing where to go, especially going into the corner. It was good that we managed to avoid.”

Just a few laps before the end, Hauger could have settled for second place, limiting the risks. However, this isn’t the way a drivers’ champion races:

“I was really trying to stay within the DRS, and gain some ground.

“Going in, before he [Vips] crashed, I was trying to be close for the DRS on the main straight, and in the end I was trying to put the pressure as much as I could and it seemed to work quite well.

“I really wanted that win and was pushing for it.”

The Formula 3 Champion has come into F2 with high expectations on his shoulders, and after what’s been a doubtful start, could we see yet another talented rookie win the Formula 2 Championship title in their maiden season? 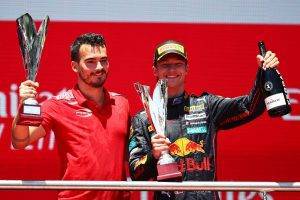