Dennis Hauger was lucky to emerge unscathed from a frightening first-lap accident in the Feature Race at the seventh round of the FIA Formula 2 Championship.

Coming off the back of his maiden Feature Race victory last time out in Baku, Hauger had a weekend to forget in Silverstone, adding no points to his existing tally of 55 and dropping from fifth to 10th in the standings.

Hauger qualified 13th on Friday, nearly a second off pole-sitter Logan Sargeant. He finished the wet Sprint Race 15th after PREMA Racing chose a set-up direction that compromised both him and team mate Jehan Daruvala.

In the opening lap of Sunday’s Feature Race, Hauger was hit by DAMS’ Roy Nissany after the latter rejoined the circuit from an off-track excursion at Turn 15. The impact broke the front-right suspension of Hauger’s car and sent it spearing across the grass entering the left-hander at Vale.

Hauger’s car then launched over a sausage kerb just after the apex and clattered into the halo cockpit protection device on Nissany’s car before both vehicles came to rest in the gravel bed on the outside of the turn. Mercifully, both drivers escaped the incident unharmed.

The Stewards considered Nissany fully to blame for the contact, issuing him a five-place grid penalty for the next race and three penalty points on his license.

Hauger explained that a spin at Turn 1 in Friday’s Free Practice session dented his confidence for the rest of the weekend.

“In Free Practice, I had a high-speed spin, and I would say that knocked my confidence a bit,” Hauger said.

“Qualifying started okay. [I was] P4 with the first set, but I lacked the confidence to go to the next step, so that wasn’t optimal.

“Race 1 was a strange one. [There were] tricky conditions, and we didn’t have the right set-up. Both Jehan and I struggled.

“It was a drying track, but he and I set our fastest laps on Lap 2 while everyone else went quicker, so that shows that something was not right.

“It was frustrating doing the maximum but being passed, and there was nothing I could do. The car I was running with early on finished P6.”

“Today, it was not the greatest first lap. I was staying where I was, but then Nissany went off track, came back on, and pushed me off. That was not nice.

“It was a big incident, the biggest I’ve ever had, and [it] left me pretty shaken.”

“So it wasn’t a great weekend. We know we have come back from disappointing weekends already this year, and we can do it again at the Red Bull Ring.” 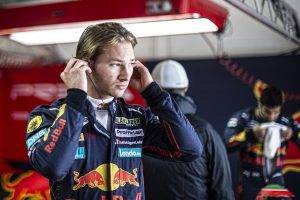