Dennis Hauger gave his all to have much improved results in Monza. Starting both races from P19 didn’t get on his way to add 13 points to his tally, despite losing the chance of winning the Feature Race due to the penalty.

As the championship was being decided in the Sprint Race, Hauger carved his way to ninth.

Though his efforts weren’t rewarded with points, he was pleased to see some progress. He said, “Obviously not the best starting position, but I think in recovery, and the pace was working a lot better. That sort of gives a good feeling to be going forward and feeling that I had to the pace.

“This track, it’s just such a big train. You just got to play it sort of in a smart way during it.”

Hauger played out the perfect strategy to overcome several duels to gain ten places from where he started. The Norwegian sustained some pressure from Theo Pourchaire, who wanted to keep the title fight alive, however, a knock sent the ART Grand Prix driver tumbling down the order to 16th.

Hauger was keeping himself out of trouble, as several drivers tripped over each other all the way to the chequered flag, he was pleased to have made the most of the slipstream to climb up the order.

“He (Theo Pourchaire) drove away from around the straight, and then he got in front of me before the breaking. It was not like a big fight at that point.” Stated Hauger,

“I just hang on at that point and sort of struggle a bit more with the tires, but I can really make a big move just after this. Before that, I was just trying to keep it cool in the end.”

Losing his chance in Feature Race

Following a poor Qualifying on Friday, Hauger didn’t expect to finish inside the top five. He believed that strategy would not be the main deciding factor, with eleven drivers lining up in front of him.

The 20-year-old wasted no time recovering from a drive-through-penalty for not having his tires fitted by the three-minute warning before the formation lap to cross the line in fourth after Ayumu Iwasa got demoted from the third place podium, which allowed Enzo Fittipaldi to take the final spot.

He added: “I maximized the stuff I could do in practice obviously with the drive-through, five cars pitted and we had to start back again in the 14th.

“In the race, we have in the pace we had an especially mid-race from then on it was quite strong, and you have to end it in the P4.

“This is a nice way to think it was 16 positions from where we started the race.

“In terms of going forward on the grid, I have to work out a bit on my qualifying. I  feel I have figured out what’s happening there.”

The Hitech driver was found entering beyond the pit lane entry bollard and had to receive a 10-second stop/go penalty, which crushed his dreams of claiming victory. Later in the race, several drivers, including Hauger, received the same penalty that affected their final results.

“Jehan (Daruvala) and (Frederik) Vesti were too far up, but I still think we close that gap quite nicely and from where we started. Without the drive-through, I would definitely have been in front of Iwasa.

“We could have been closer to them straight away, and with a pace in the mid-race, it could have been looking quite good. Anyway, it’s a decent step forward and a good way to end the week.”

Following the non-stop three weeks of action and after the summer break, Hauger doesnt have the time to visit his hometown in Aurskog, Norway, which he described once as a good place to disconnect.

There’s barely time to rest for Hauger as he will be competing on his home soil for the first time in the Porsche Carrera Cup Scandinavia.

“I haven’t really been home for a month now. I will get home, relax, and enjoy life,” he told Inside F2, “I have a Porsche race next week, and it will be the first car race on my region’s soil. That will be quite cool.

“The Rudskogen is the name of the track. It’s actually my manager’s track back home in Norway, which is a cool one, the best one in Scandinavia, I would say.” 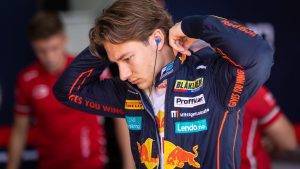