Dennis Hauger took a late victory in the FIA Formula 2 Feature Race in Baku after Jüri Vips found the wall at the infamous castle section in the closing stages.

Vips had the perfect start from pole position, followed closely behind his teammate from last year, Liam Lawson. Saturday’s Sprint Race winner, Frederik Vesti was unable to get off of the line which dropped him to the back of the grid once he managed to get going, after the team was able to recover his car from the pit lane.

It wasn’t long until the safety car was brought out following a collision between Amaury Cordeel and Olli Caldwell. The pair came together going into Turn 4 which subsequently ended both of their races on the first lap.

Clément Novalak was the next driver to retire after pulling into the pit lane with a mechanical problem. The MP Motorsport team were unable to get the car back out onto the circuit which brought the Frenchman’s race to an early close.

Marcus Armstrong was able to get ahead of his teammate from third position during the pit stop stages. He pitted one lap later than Vips after following Lawson closely for the opening laps. Vips soon reclaimed his lead from Armstrong on the track with a clean overtake going into Turn 1, on the next tour.

Roy Nissany and Cem Bölükbasi both found the wall at Turn 2. Both drivers were battling for position until Nissany attempted to overtake the Turkish driver around the outside. Nissany locked up and neither of the two drivers were able to make the corner.

The leading Hitech pair were incredibly close to causing a collision on the safety car restart as Armstrong was following Vips, front wing to rear wing into the first turn which caused damage to the Kiwi’s front wing.

Armstrong wasn’t the only driver at the front of the field to sustain damage as his compatriot, Lawson, also made contact with Doohan on the restart. The Carlin driver picked up a puncture which dropped him to the back of the field. The stewards were in agreement with Lawson’s radio messages where he complained about the move from Doohan and awarded him a 5 second time penalty.

Championship contender, Théo Pourchaire also damaged his front wing after taking evasive action to an incident with Jake Hughes and Ayumu Iwasa ahead of him. Iwasa hit the back of Hughes VAR Motorsport car.

Absolute heartbreak for Vips as he crashed out of the lead at the castle section and into the wall. His race ended with 6 minutes to go on the clock. He had dominated the race through multiple safety cars and collisions but unfortunately for him, he was unable to make the chequered flag and take the 25 points for the race win.

This gave the lead to Dennis Hauger, who was applying pressure to the Estonian consistently since the safety car restart. In the debrief room ahead of the podium celebrations, he said he could see that Vips was pushing ahead of him moments before he found the wall.

Hauger was joined on the podium with Logan Sargeant, who secured his highest result in a Feature Race so far this season. In third was championship leader, Felipe Drugovich who played the long game, just like the others who stood on the podium with him. Therefore, he was able to further extend his championship lead as Pourchaire was unable to score. 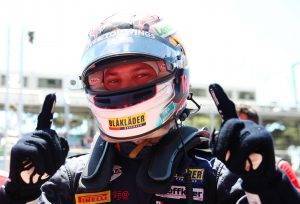