Hauger, driving reigning champion Felipe Drugovich’s title-winning car, set his personal best lap time of a 1:36.821 52 minutes into the three-hour session. Hauger was announced to be racing for MP Motorsport next season on November 4, becoming the first driver confirmed for the 2023 F2 grid.

Hauger’s 2021 F3 title rival Jack Doohan, continuing with Virtuosi for the test, was the most productive driver of the session with 41 laps, finishing 85 thousandths off the lead in second. Third place went to Richard Verschoor, testing for Van Amersfoort Racing today after competing for Trident this season, with Amaury Cordeel in the other Virtuosi in fourth.

Reigning F3 champion Victor Martins, who has remained with ART Grand Prix for the test, finished fifth and took top honours among first-time F2 testers, while Carlin’s Enzo Fittipaldi was the final driver to break the 1m37s barrier despite an accident that brought out the red flag halfway through the session.

Trident’s Roman Stanek, who ended the session seventh, was the first to turn a lap in the session, but it was not until 22 minutes after the lights went green that Campos’ Ralph Boschung set the first competitive lap time with a 1:38.137.

Boschung’s subsequent time of a 1:37.820 put him at the top after the first 30 minutes. He was soon usurped by Charouz Racing system tester Roy Nissany, who was then beaten himself a few seconds later by DAMS’ Ayumu Iwasa in what was a déjà vu of how the last F2 qualifying session of 2022 ended.

Doohan and new PREMA signing Frederik Vesti each spent time at the top of the timesheets before Hauger set his fastest lap. That lap time from Vesti, , on a 1:37.225, was good enough for ninth in the final order, putting him behind Iwasa in eighth and Théo Pourchaire, his 2022 ART Grand Prix teammate, in 10th.

Three red flags interrupted the session, beginning with Fittipaldi’s incident in the final sector. A second came out with just over an hour to go when new Campos signing Kush Maini stopped at Turn 15. Thirty minutes after that, Brad Benavides, testing for Charouz, had an accident in the final sector, which necessitated a 15-minute recovery period.

Behind the top 10 drivers, Clément Novalak, who will switch to Trident next season, just edged Jehan Daruvala, driving Novalak’s 2022 MP Motorsport car in the test. Nissany took 13th ahead of new DAMS signing Arthur Leclerc – who was also in Nissany’s 2022 car – and recent F2 debutant Zane Maloney, testing for Carlin.

PREMA’s Ollie Bearman finished 16th ahead of Boschung, with Maini finishing 18th after his issue, the final driver in the 1m37s.

Drivers stepping up from F3 made up the remainder of the order, with VAR tester Rafael Villagómez 19th; Benavides 20th; and the Hitech pair of Isack Hadjar and Jak Crawford 21st and 22nd, the former with only eight laps under his belt after an engine failure early in the session scuppered his testing plan. 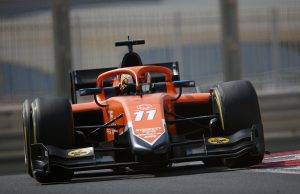