The Italian Domenicali is soon to begin his new role within Formula 1 next month in place of the outgoing Chase Carey.

Fearnley left Force India when they were bought by the Lawrence Stroll-led consortium back in the summer of 2018. a

“Obviously, I’m following in the footsteps of two very good predecessors in Gerhard [Berger] and Stefano. So a lot of work to do for my side to equal and match what they’ve been doing over the over the years.

“It’ll take me a few months to get my feet under the table as you can imagine. But once we’re underway with it, hopefully we can continue the good work that they’ve done, and maybe progress it on a little bit.”

Despite the single-seater route looking more set than it was a few years ago, thanks to the efforts of Berger and Domenicali to make it more straightforward to go from karting to Formula 1 through Formula 4, Formula 3 and Formula 2, Fernley still feels he has work to do, particularly when it comes to affordability.

Over recent years the route from karting to Formula 1 has been narrowed and more importantly clear for all of those on that journey. Previously the route was un-organised and just a collection of independent racing formats. With new rebranding and restructuring of the Formula 3 and Formula 2 championships in particular the true Road to F1 is becoming much clearer.

“Both Gerhard and Stefano obviously put all that in place,” said Fernley.  “But I think there’s still probably work to be done, particularly on affordability. That’s something I was very keen on, even at Force India.

“I see us still continuing that process to make sure we can get it as affordable as possible so as many people can take part as they can.

“It’s about understanding where the categories are today, because obviously, I’m coming in new, and when people come in new you always have a different take on things, and you can have a look with new eyes, which is not a bad thing.

“But the most important thing is to continue the stewardship has already been put in place and work it through from there.  We’ve still got you still got a little bit of work to do, because super licences are obviously approved through that commission. So it’s quite a broad programme.” 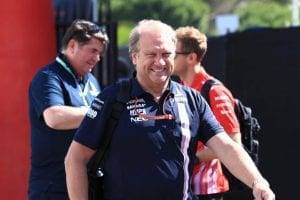