Heartbreak for PREMA in Feature Race

Heartbreak for PREMA in Feature Race

PREMA suffered heartbreak in the Feature Race in Bahrain, as the opening round of the 2021 FIA Formula 2 Championship came to a dramatic end.

Oscar Piastri retired with three laps remaining after contact with Carlin’s Dan Ticktum, while Robert Shwartzman fought back to seventh after an early incident.

Piastri got a great start from sixth and was able to get himself up into the lead early on. However, the rookie became vulnerable to those behind on softer tyres after a late safety car.

At the restart, Piastri had to fight for every position, but his race ended early with contact whilst fighting for third.

Piastri said: “Tough race in the end. Until the contact with Ticktum, it had been an awesome race, with mega pace on the softs. Even with the hards, we were sticking in there.

“I could see that the two drivers in front were starting to fall back towards me, and at the same time, the people behind were catching up. I was trying to stay in third to try and fight for the win at the end, but just wasn’t meant to be today.”

The heartbreak for PREMA continued as Shwartzman had another challenging day. The Russian had contact in the opening lap with DAMS’ Roy Nissany, which resulted in a drive-through penalty for causing the collision.

The late safety car meant Shwartzman could catch up, eventually making his way through the field to the points and taking the fastest lap.

Shwartzman said: “I’m super sad about how this weekend turned out since the car and balance were quite good. I think we had enough potential to battle for the podium in all three races.

“Today, I made quite a good start, but there was no room, and I was a bit confused about where to go. Then, in Turn 3, Armstrong pushed me off the kerb and into the gravel, which could have been dangerous.

“I lost positions, and I reached Turn 4 with dirty tyres. I locked both front tyres and hit Nissany. It’s my fault, and I take all the blame; I couldn’t control anything at that stage. I served the drive-through, which was fair, and then tried to do the best I could to recover.

“In the end, we finished P7, close to P6 and with the fastest lap time. Now it’s time to go back to work and focus on the next round.”

It’s a long wait till Formula 2 returns for the second round . PREMA will want less heartbreak when racing gets underway at the end of May for the Monaco Grand Prix. 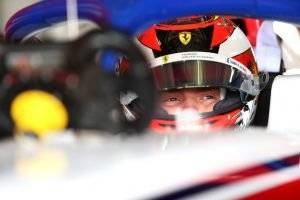