Hitech fast off the line

Hitech fast off the line

The British based Hitech GP didnâ€™t mess around when it comes to not only their announcement that they would be stepping up into Formula 2 for the 2020 season but also a few days later announcing their driver line up.

They announced 2019 rookie Nikita Mazepin and last year’s third-placed driver and F2 veteran Luca Ghiotto as their maiden driver line up for 2020.

Hitech themselves are in their first season in the championship so it will be new tires to tread but in the teams’ favor, they will be building the existing team up following an impressive season in Formula 3. The will plan to retain all their staff and add to this rather than start from scratch.Â

Despite only being formed in 2015 they have achieved a fair amount of success in other formulas and finished second to Prema Powerteam last year so their momentum looks good. Will they have a similar impact at the next level? We will all wait and see but having a new team and additional opportunities for staff and drivers can only be a great thing for the Formula 2 Championship.Â

Luca Ghiotto will participate in his fifth season in F2 following what was believed to be his final season in the series and ultimately disappointment at finishing only third in the standings.Â

Ghiotto is a solid driver and seems like a good choice for a new team in the championship, but for Ghiotto Iâ€™m not sure what the motivation would be unless he really feels he has a chance of fighting for the title in 2020.Â

This looked very much the case and we had all be waiting to see what his next move was. However, on a positive note, Ghiotto is an experienced driver and will offer plenty of insight into the driver plus offer insight into team operations you would think given it will be his fifth team in as many years. The Italian has five victories and 21 podium finishes on his CV since making his debut in the category back in 2017

Nikita Mazepin was last year a rookie driving for ART GP finishing 18th in the standings and picking up a few points along the way.Â

Mazepinâ€™s Father Dimitry is one of the main financial backers for Hitech so there may have been a bit of a push towards giving Mazepin this opportunity but as insinuating as that may seem he is definitely worth a second season and along with an experienced teammate the team should be well-positioned for the new season which begins in Bahrain 22nd March.Â

Hitech has acted quick to announce and secure their line up for the new season and they will surely be looking for a similar pace to that in F3 last year finishing their rookie season as runners up along with four wins and six podiums.

What do you think?

Let us know in the comments below how you think Hitech will get on in their rookie season and how you think their new driver line up will fair in 2020.Â 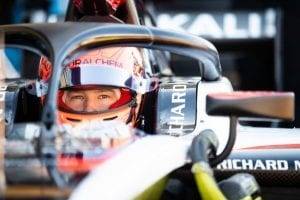