It was a tough weekend at Silverstone for the Hitech GP team in the fourth round of the FIA Formula 2 Championship. However, Juri Vips took second place during the first race of the weekend.

Along with a podium, the Estonian also took points in all three races to pull off an almost trouble-free weekend.

Vips said: “In the end, it was just 0.1 that we were missing in qualifying to have a decent weekend. But even if we had improved that 0.1, we were far from pole, so we needed something more.”

“It was just the qualifying that was a poor session. We understood what happened; it’s just a shame that we had a difficult weekend from there.”

“I’m not concerned going forward; it was just that we didn’t get the car hooked up for that particular session; we had been quick in free practice on the hards.”

“The cautions at the end of qualifying did possibly cost us P4 if I had completed the lap ok, I was up. But in the end, I don’t look at this too much, it’s the same for a lot of people, and the fact is that even if I had finished the lap, I would have been 4 or 5 tenths off the pole.”

He added: “I just got a bit boxed in at the start; otherwise, I possibly could have been fifth. There really weren’t enough opportunities today; it was a pretty boring race; I couldn’t really do anything too much.”

Liam Lawson scored some good points in both Sprint Races, but his strategy in the Feature Race meant he finished just outside of the points in 11th, which left him feeling disappointed.

Lawson said: “A difficult weekend, and honestly, we didn’t have the pace, and I don’t know why. This is a track that I enjoy and go well at but right from the start, we struggled, and it didn’t come to us.

“The pace just wasn’t there, the red flag at the end of quali didn’t help, probably kept us out of the top ten, but we didn’t have the pace for the front.”

“I’d left nothing on the table, thought I’d put together a good lap, but the time just wasn’t there.”

“In the races, I had more tyre deg than those around us, and we couldn’t fix that, so it was a battle. We got some points, but it certainly wasn’t what we were looking for.”

Hitech GP will keep working until they return to action in September for round 5 at Monza. 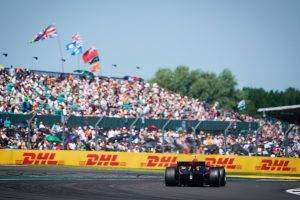