Hitech heads to another street circuit this weekend, swapping the tight streets of Monaco for the old streets of Baku and Azerbaijan for the third round of the season.

Despite Baku being another street track, there are more opportunities to overtake at the end of the long straights. But there are still some tight parts around the old part of the city.

The drivers, who will both race at the circuit for the first time this year, will need to adapt quickly to get the most out of their car and claim points.

Juri Vips is ready for the weekend and is willing to be brave to get results during the three races.

The Estonian driver said: “It will be an interesting weekend, a new experience for all of us.

“I think that the main focus here is just to be clever in the races and to make sure you finish. Normally if you finish here, you are in a good position.

“It’s a street circuit, but it is very different to Monaco; here, the long straights make overtaking ridiculously easy.

“So normally, the races are really hectic here, and you have to be clever and stay out of trouble.

“There is a very fine line between crashing and making up spots, winning the race.

“I’ve run it in the sim, over one lap. I don’t think it’s the most interesting street track; I think it’s quite unique and cool still.

“But I think that the coolest part of the weekend is the races; they are very, very particular here.

“As far as car set-up goes, it’s a little bit like Monaco in that it is a street track, so some of the balance items and things you’ve learned carry over, but generally, it’s quite different.

“It’s low downforce because of the long straights; it’s more about speed.”

Liam Lawson is looking for the evolution of the track and will hope his luck will continue during the weekend.

“Obviously, there’s a massive straight, and there’s normally a lot of overtaking, so I’m very much looking forward to it.

“I like street circuits; I love Monaco, and though this is a completely different type of circuit, I’m very much looking forward to driving on it.”

“We’ve done a couple of sim sessions; it’s quite a long lap, so putting everything together for the perfect lap will be very important for quali.

“The track evolution on a street circuit is always a major factor; there’s a big change, through practice, quali and the races.

“The track gets faster and faster, and it’s a question of when to step up the pace; that’s quite important.

“We run low downforce, so that means a different type of driving, the car is a lot looser, this track is also quite low grip as well, being a street circuit, so it all makes it very different to a weekend on a normal circuit.”

Hitech enters the third round of the Formula 2 championship fifth in the standings after a positive first couple of rounds.

The team will want to build on that to climb even higher up the championship table during the next round. 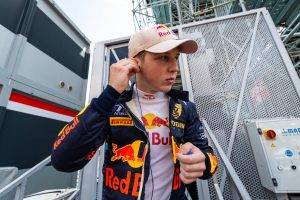