Marcus Armstrong will have high hopes this season in the 2022 FIA Formula 2 Championship, as he joins the UK based Hitech Grand Prix team.

“I’m looking forward to be working with a successful group of people and a completely new team this year.” – Armstrong.

After recently parting ways with the Ferrari Driver Academy, and DAMS announcing Ayumu Iwasa would be joining the driver lineup with Roy Nissany for 2022, F2 fans were left wondering what would become of the New Zealander.

He has an impressive early Karting record, and won the Italian Formula 4 Championship in 2017, coming second to Jüri Vips in the ADAC Championship that same year for PREMA.

Staying with PREMA for the 2018 Formula 3 European Championship, and driving for them in Macau, the Kiwi remained with the Italian based team for the official Formula 3 season in 2019, finishing second to Divers’ Champion, Robert Shwartzman.

With race wins in Norisring, Hungary, Spa and Sochi in both F3 series’, the Kiwi won his maiden Formula 2 race in 2021 at the inaugural Jeddah GP.

Jumping into the Hitech car for the post-season test in Abu Dhabi, Armstrong’s best result on the timing sheets was a P3.

“I’m really pleased to be joining Hitech this season in Formula 2. Team Principal, Oliver Oakes, brought me to Europe a few years back and I saw Hitech in the early days. Since then, it’s transformed into one of the powerhouses of Formula 2 and Formula 3.”

The Hitech car looks good. Vips’ best result during the post-season test was a P4.

With Armstrong and Vips once again teaming up, as they did in 2017, can the duo do it again, and win the Teams’ Championship for Hitech this season? 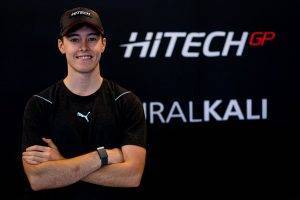