With a home crowd and home circuit advantage, Robert Shwartzman carefully manoeuvred his way around the tricky wet Sochi Autodrom to finish on the third step of the podium in today’s FIA Formula 2 Sprint Race.

In his post-race interview, he acknowledged the audible support:

“I’m so happy to see all the people here.”

Qualifying in seventh place on Friday, meant Shwartzman started fourth on the reverse-grid.

The Russian experienced a couple of moments himself throughout the race. A mistake meant HWA Racelab’s Jake Hughes pounced and temporarily took his position on track. If you blinked you missed it, as Shwartzman was quick to claim back his P4.

Later in the race as the tyres and brakes warmed, Shwartzman lost grip of his PREMA car on a wet patch when going for the fastest lap. It was a moment that could have ended his race. However, he held it together, and kept the car facing forwards, taking third place, after Liam Lawson (Hitech) succumbed to the damp track and hit the wall on Lap 6.

The Ferrari Academy driver, in his second year with the Formula 2 PREMA team, managed his fifth visit of the season to the rostrum, adding valuable points to his Championship campaign, and the teams’.

His closest rivals, Guanyu Zhou, and Oscar Piastri, finished out of the points. The UNI_Virtuosi driver not even starting the race having spun out on the Formation Lap.

Shwartzman’s team mate, Piastri finished in P9, after a mixed race of losing and gaining places on the slippery damp Sochi circuit, following a lightening storm, that saw the first Sprint Race postponed to later in the day. So late, that Sprint Race 2 was cancelled completely.

The result today will close the gap to Zhou and Piastri, although it may be short lived; Piastri starts tomorrow’s Feature Race in pole position, and Zhou, P4.

The weather may play a part as it did today.

“I don’t even know what the weather’s gong to be because Sochi is so unpredictable, so it depends. I’m going to give it 100% and give it all out, and try to win, or at least get to the podium.”

Thinking about winning tomorrow’s race is a possibility, even from P7 for the Russian, “I think if we have really good pace and a really good start we can actually manage that.”

Any athlete would probably agree that being on home soil has a positive influence on performance:

“The crowd is going to cheer me up tomorrow, I will feel it for sure. It’s going to push me even more.”

Being the Feature Race there is a mandatory pit stop. Therefore, strategy can come into play during the longer 28 lap race.

“As for the strategy,  we still need to properly work for it tomorrow and think about it and we’ll see what we have on the table.

“If there’s a chance we can have a better strategy than the others we’ll try to use it. But, we will know that only tomorrow.”

Shwartzman has had a varied season, with two retirements in Bahrain, and Monaco, complimented by two sprint race wins, in Baku and Silverstone.

Can the Russian get his first Feature Race win of the season on Sunday in Sochi? 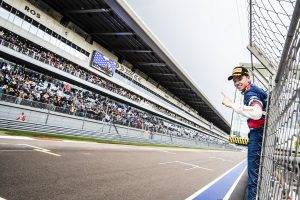