Racing fans turned out in record numbers to Circuit Zandvoort in the northwest of the Netherlands to see Max Verstappen win the Dutch Grand Prix for the second year in a row. But for another Dutchman, it was a milestone event in itself, one that showed him firsthand how Dutch motorsport – and his team – had grown over the years.

“The home grand prix felt special because I realised what has happened since Max was in our F3 team back in 2014. That was quite an eye-opener. I knew of course what happened last year, but I wasn’t in Zandvoort last year. So I saw it with my own eyes and saw that the whole circuit, which I’ve known for 50 years, is completely changed. It looked more or less like a street circuit now. So that was quite special.”

Few are better equipped to speak on Zandvoort’s history and Dutch motorsport than Frits Van Amersfoort, the boss of new F2 team Van Amersfoort Racing. He took Verstappen to third in the 2014 FIA Formula 3 European Championship in what was the eventual world champion’s sole season in junior single-seaters.

While Verstappen basked in his 30th career win, van Amersfoort couldn’t afford to linger with many of the 305,000 fans in attendance over the weekend. He and his team had to pack up before the Formula 1 race to make the day-long drive to Monza, Italy, where the team would contest the penultimate round of the F2 season and where he spoke to InsideF2 from the paddock on Thursday.

“We were a little bit annoyed … that we had to leave during the start of the Formula 1 because we would have loved to stay a bit longer. But, in the end, it’s good that we got away because we’re here again. Everything has pros and cons.”

Van Amersfoort founded his team in 1975, a year that was the occasion of a remarkable underdog story at Zandvoort: James Hunt won the Dutch Grand Prix for Hesketh, giving him and the team a highly improbable first win.

Zandvoort dropped off the F1 calendar after the 1985 season, and F1’s profile in the country waned thereafter. In 2022, with Verstappen’s success over the past half a decade rekindling national interest, Van Amersfoort dove into Formula 2 and Formula 3 for their maiden campaigns in each.

The Zeewolde-based team have taken a pole, a victory, and several podiums in F3, but things have been drier in F2, with only eight total points finishes across 24 races and a best result of fourth in the Feature Race at Jeddah.

On last Sunday’s world stage, though, van Amersfoort got to preside over a surprise underdog result of his own; the maiden points finish for Amaury Cordeel, who took sixth in Sunday’s Feature Race on F2’s first visit to Zandvoort.

“Amaury’s a bit underrated,” van Amersfoort says of his Belgian racer. “He’s been pressed in a corner where he doesn’t belong. You understand what I mean? And I’m happy that he showed, and I’m happy now that he finished sixth. He deserves that.”

Cordeel had struggled to progress from the rear of the field and earned early notoriety for accumulating penalty points at a record rate to earn a race ban by Round 7.

In recent rounds, however, Cordeel has shown more promise, taking his best qualifying result with seventh at Austria on his return from his suspension and largely avoiding incidents since that round.

“I’m really pleased with the way that Amaury is graduating. He doesn’t make big mistakes anymore. At Zandvoort, he was pretty fast, and he’s really learning also, when you compare that to the beginning of the season.”

Cordeel spoke to InsideF2 at Zandvoort, the day he took those maiden points. He explained that he had conquered a steep learning curve after a season in the FIA Formula 3 Championship that likewise yielded no points.

“I think I just stepped it up a bit higher. It’s Formula 2, and you have to work as hard as you can,” Cordeel says. “The first part of the season, I had to learn a lot from only one year in F3, and not the best year in F3 to Formula 2. So it was a learning curve.

“I think I needed the first half to learn a lot for this second half. And now that I learned it, [I] have to keep going like this.”

Cordeel told us that he hopes to return to Formula 2 next season, which means more opportunities to get comfortable with the Dallara F2 2018. And while he acknowledged the progress that earned him his best career result, he thinks he could have done even better.

“Free practice was quite good. We did the new tyre, but then we did a race one. We were always P2 until the end, and then the guys who did cool, push, cool, push dropped me back to P8, but it was already good.

“Then, in Qualifying, I was feeling confident on the first set. We were P6. That was good, but then the second set – I don’t know why, but we didn’t make the jump, so P12 at the end.

“I was a bit sad because I wanted to have the P10 to have the reverse grid pole, but, eventually, P12 is a good starting position.

“Yesterday was just a normal start, but [I] was stuck behind someone. In Zandvoort, overtaking is quite hard, but then today… good start, up to P9, and then after the restart [I] just kept it like this.

The accident Cordeel references was a stack-up on Lap 21 at the end of the second safety car period. Liam Lawson led the field as one of eight drivers who had yet to pit, but as he bunched the field up, chaos ensued. Four cars were eliminated or forced to pit.

As a result, Cordeel, who had already stopped, jumped from 17th to 12th, which became sixth once everyone else came in for their mandatory stops. And that was the only way Cordeel could make up positions around a circuit where ‘routine’ races are the norm and any overtakes the exception.

“When you’re in the front, or more or less in front, you don’t need to do much to keep them behind you,” van Amersfoort tells InsideF2. “The nature of Zandvoort, it hasn’t changed.

“I’m sorry for the guys who invented the banking; it looks terrific, especially the Hugenholtz corner [Turn 3] looks fantastic, but overtaking is still nearly impossible.

“It reminds me of 25 years on Masters of Formula 3, where we had the same thing. It’s the way it is.”

The Masters of Formula 3, the previous flagship race at Zandvoort, last took place in 2016. There is a unique link to the event on the other side of the Van Amersfoort garage in David Beckmann, the only current Formula 2 driver to have competed in that final edition of the race.

Beckmann also took his first podium in European F3 at Zandvoort earlier that year. But his most recent visit to the circuit on the F1 Grand Prix weekend didn’t go so well.

The stewards hit Beckmann with a penalty for erratic driving during the first safety car period demoting him from eighth to 16th. It would have been the team’s first double-points finish in F2.

“We were very happy that we had two cars in the points, although unfortunately, we lost one,” van Amersfoort explains. “David is still pretty upset about it, but, I mean, that’s always the case.

“I understand also the part of the stewards. They have to take some decisions, and that’s the way it is. It’s in Formula 1 [it’s] the same, so in the end, I think we can see that we are finding our way up a bit.”

Van Amersfoort describes himself as a ‘down-to-earth’ character with ‘conservative’ expectations. He makes no promises on results, but at Monza, a high-speed circuit with ‘everything different’ to Zandvoort, van Amersfoort is looking to reach another milestone. One that illustrates the advancement in motor racing technology since VAR’s earliest days in 1975.

“We always approach every weekend like, ‘Let’s see what happens’. Monza is the Temple of Speed. It will probably be for me the first-ever race where, as a team owner, my cars are over 300 [kilometres per hour],” he says.

“That’s something that is of course a responsibility to carry, but considering the last few races, I have good hope. It will, as always, probably depend on a good slipstream. And that’s not so easy.” 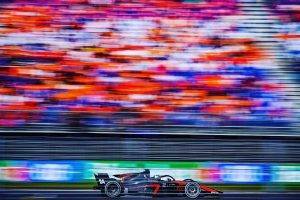