The 2022 Formula 2 season has provided plenty of drama, surprises and action up until now. FIA Formula 2 always delivers and provides competitive racing, this season has been no different.

As we catch our breath before the start of the second half of the season, we take a closer look at our current Top 10 drivers in the standings got to this point in their careers.

The current F2 championship leader, Felipe Drugovich started his career in karts in 2009. It wasn’t long before he bagged his first title in 2011 and then backed it up with another the year after. He made his single-seaters debut in 2016 when he raced in the ADAC Formula 4 series. He achieved his first and only podium of the season with third place at Zandvoort. The following season he switched teams and scored the most wins of any driver to eventually finish 3rd overall in the championship behind current F2 driver, Juri Vips. The 2017 and 2018 seasons were very successful as he took titles in the MRF Challenge Formula 2000, the Euroformula Open Championship as well as the Spanish Formula 3 Championship. He stepped up to Formula 2 for the 2020 season and scored 3 wins and finished the championship 9th overall. Consistency has been the main focus for his 2022 campaign where he has enjoyed 4 wins and 7 podiums and is deservedly on top of the standings.

The young French driver made his competitive karting debut around the age of 7 and immediately won numerous French karting titles. He later finished on the podium in the prestigious OKJ World Junior karting championship. In 2018 he made the step up to single-seaters competing in the French Formula 4 championship. He finished his debut season as the top rookie and took the ADAC Formula 4 title the following year. Théo continued his climb up the motorsport ladder by entering the Formula 3 championship in 2020. He became the youngest ever FIA Formula 3 winner at the age of 16 and a consistent season saw him just miss out on the tittle which was claimed by Oscar Piastri. He finished 5th overall in his first full Formula 2 season in 2021. In August 2021 he completed his first Formula One test, driving for Alfa Romeo at the Hungaroring. For the 2022 season he has enjoyed 3 wins and 7 podium finishes to date.

The 21 year old American started racing karts in 2008. He won multiple titles during his karting career including the ROK Cup International Final (Mini ROK) in 2011 and later the Karting World Championship in 2015. He made his single-seater debut towards the end of 2016 driving in the UAE Formula 4 Championship. He finished 3rd in the 2017 British Formula 4 Championship and then moved on to FIA Formula 3 in 2019 where he finished on the podium at Macau. In 2020 he finished 3rd overall with 2 wins and 6 podiums, while 2021 was not as successful after he changed teams and finished 7th overall. Later in 2021, it was announced that he was joining the Williams Driver Academy. Logan competed in three Formula 2 races in 2021 and has been a strong contender this season. He has suffered a bit of bad luck but still finds himself 3rd overall, scoring 2 wins along the way.

Enzo, the grandson of 2 time formula one champion Emerson Fittipaldi spent a few seasons honing his skills in karts before beginning his car racing career in 2016 racing in the Ginetta Junior championship. He made his single seater debut in 2017 in the Italian Formula 4 Championship and in 2018 scored 7 wins and 12 podiums to claim the title. In the same year he also finished 3rd in the ADAC Formula 4 Championship. After finishing as runner up in 2019 in the Formula Regional Euro Championship, he moved to Formula 3 the following year. He finished a disappointing 15th in the standings but did score 1 podium in 2021. Enzo made his Formula 2 debut with Charouz in 2021, competing in 8 races. He has been one of the big surprises in 2022 and has finished on the podium 5 times.

Jehan began karting in 2011 at the age of 13. Between 2011 and 2013 he was the champion in the Yamaha Junior All Stars Malaysia championship, KF3 Asia Pacific championship and the KFJ Super 1 National Championship. In 2013 he was 2nd in the KFJ International Super Cup. In 2014 he finished third in the CIK-FIA World Championship driving in the KF category behind Lando Norris and Nikita Mazepin. He made his single-seater debut in 2015 racing Formula Renault 2.0. He raced in various categories with some success and then moved to the FIA Formula 3 series in 2019 where he picked up 2 wins and 7 podiums along the way to finish 3rd overall. For the 2020 season he moved up to the FIA Formula 2 series where he finished 12th. In 2021 he finished 7th. Six podium finishes in the 2022 season finds him 5th overall in the standings.

The 20 year old Danish driver began karting in 2011 and won the Rotax Mini Nordic Championship in 2012. He won the Danish championship in both 2013 and 2014 in the Cadet junior and KFJ classes respectively. In 2015 he went on to win the WSK Final cup again in the KFJ category. He moved to circuit racing in 2016 racing Formula Ford in Denmark and finished the season 4th overall with 2 wins. 2017 saw Vesti finish runner up in the Danish Formula 4 Championship while in 2019 he went one better to claim the Formula Regional European title. He competed in the FIA Formula 3 Championship in the 2020 and 2021 seasons, finishing 4th overall in both seasons. This year he moved to Formula 2 and has one pole position and 1 win to his name in his rookie season.

Ayumu Iwasa was born in 2001 and started karting in Japan in 2005 but only began racing competitively in 2014. He won the 2014 Suzuka Karting Championship in the Yamaha class and later went on to win in the X30 class. In 2017 he moved to single-seaters, racing in the Japanese Formula 4 Championship. In 2020 he dominated the French Formula 4 Championship with 9 wins and 15 podiums to take the title. He moved to FIA Formula 3 for the 2021 season where he scored 1 win and finished 20th overall. He moved to Formula 2 for the 2022 season and took his first win at the French round of the series. When in the groove he has shown to be difficult to beat and is set for a strong 2nd half of the season.

The 20 year old New Zealander began karting at the age of 7. His first National title came in 2012 when he won the Cadet class of the NZ CIK Championship, and finished 3rd in the NZ Sprint Championship in the same year. His second national title came in 2013, and he also finished runner-up in the NZ Schools Championship. He added two more National karting titles in 2014. He made his single-seater debut in 2015 and was the New Zealander F1600 champion the following year. He finished as runner up in the Australian F4 championship in 2017 as well as the ADAC F4 championship in 2018. In 2019 he won the Toyota Racing series while also competing in FIA Formula 3. 2020 saw him finish 5th overall in Formula 3 with 3 wins and 6 podiums. Lawson stepped up to Formula 2 in 2021 and scored 1 win and 3 podiums on his way to finishing 9th overall. He also narrowly missed out on the DTM title the same year. This season he was the early championship leader and has 2 wins to his name and 6 podiums, but has slipped a little down the order.

Jack, the son of multiple motorcycle World Champion Mick Doohan decided at an early age to follow the 4 wheel route in motorsport. He managed 2 National Australian karting titles in 2015 and 2016 and also finished 3rd in the CIK-FIA European Championship in 2017. He started his single-seater career at the age of 15 in the British F4 Championship.  He finished fifth in the standings, just one point behind team mate Dennis Hauger. In 2019 he finished 2nd in the F3 Asian Championship before moving to FIA Formula 3 in 2020. His second year in the series brought him the runner up position, again behind Hauger. Jack has shown a lot of promise in the 2022 season and if it wasn’t for some bad luck, would have been a lot higher up in the standings. To date he has scored 2 wins and 4 podium finishes.

Born in 2000, Vips claimed his first National title in 2011. He went on to win the coveted Rotax Max Grand final in 2014 driving in the Junior Max category. In 2016 he entered both the ADAC and Italian Formula 4 series. A consistent 2017 season was rewarded with the ADAC Formula 4 title for Vips. He made his Formula 2 debut in the 2020 season and scored 2 wins in 2021. Some inconsistent results in 2022 sees him a little lower in the standings than expected but he does have 4 podiums to his name. 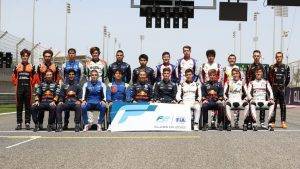