How to win a Championship Title

How to win a Championship Title

As we approach the final laps of the 2021 FIA Formula 2 Championship we take a look into what it takes to become a front runner. Both Guanyu Zhou and Oscar Piastri are looking likely to be this year’s winner, they look set to have a magnificent face off in the last couple of rounds.

In general sporting terms, it’s quite simple. All you have to do is finish the season with the most points and you are the champion.

In motorsport, the end goal is the same however it can be a little more complicated. Not only is the driver skill put to the test, but also the reliability and performance of the equipment as well as the performance and decisions of the team that ultimately influence the outcome.

Often there is such a small margin between winning and losing which makes it essential for all aspects to align perfectly in order to come out on top.

As a racing driver, you need to be on top of your game. Because of all the outside factors that could influence the end outcome, you need to be one step ahead of the competition and be in a position to control as much as possible by yourself.

Any little advantage against your competitors could be the difference between winning and losing at the end of the season.

Physical fitness is one of the key areas where the driver has control. A lot of sacrifice and self-discipline are required to keep the body in the best shape possible.

A racing driver is a professional athlete and not many people realize what toll the body takes when participating in motorsport. Many hours are spent in the gym and strict diets need to be followed to make sure the body is always in prime condition.

As in other sports, the mentality aspect required in motorsport plays a crucial role. The driver must be in a good frame of mind in order to perform at his/her best.

You have to have the confidence and self-belief to be able to produce the results. Any doubts or outside negativity needs to be eliminated. During a race the driver needs to maintain a sharp and focused mind and be prepared for any situation thrown at him/her.

Sometimes things don’t go according to plan, and then a calm head and a never give up attitude are required to recover from the situation and get on with the job at hand.

A successful driver and team will always have a strong working relationship between them. Strong communication skills are essential especially where a driver needs to provide feedback to the engineers in order to make the necessary changes to vehicle setup or adjust strategy.

It is very important that the driver understands the mechanics of their equipment to be able to provide accurate and detailed feedback. This can be achieved by spending the extra hours in the workshop with mechanics by asking the questions and getting the hands dirty.

Although it is one person sitting behind the steering wheel, motorsport is very much a team sport. The equipment used is probably the most important aspect attributed to the driver’s success. It is very seldom that a driver can win if the vehicle is not competitive.

A driver also can’t win if the competitive vehicle is not reliable. The team needs to make sure that they provide the driver with the best possible equipment that will consistently finish a race without any issues. This applies to all levels of motorsport and is a fundamental aspect to the success of the campaign.

Decisions are normally taken as a team and can always have an impact on what is trying to be achieved. During a race, tactical strategy decisions always play a role in the outcome. The margins for success or failure are so small, but it can be very rewarding when you get it right. Stopping for tyres a lap earlier or later could win or lose you a race.

Of course, some things are always out of your control, especially in motorsport, so a bit of luck always helps. A collision, a mechanical failure, a safety car at the wrong time can all ruin your race instantly. The unpredictability is what makes it exciting for the fan.

Formula 2 is more unpredictable than most other motorsport series. The same chassis and engine is used for all teams which eliminates another variable and makes it even more important for everything to align in order to succeed. There is no luxury of having a superior engine to compensate for areas where performance may be lacking. Sprint races and reverse grids are exciting for the fans but it could be a nightmare for the teams and drivers when things go wrong. A poor single lap qualifying could put you on the back foot for the entire weekend. You have to be on top of your game at all times. Most Formula 2 drivers have won championships in various other categories and know what it takes to get it right. Many people have the opinion that a title winning achievement in Formula 2 is a greater sense of achievement than in many other categories.

Championships are often won on days when you don’t win. On those days when you can’t win, it is important to finish as high as possible and minimize the damage when others are scoring more points. So far this Formula 2 season, Oscar Piastri and the Prema team have managed to deliver consistent performances and that is why they find themselves at the top of the table heading into the final few races. Although they would now be the favorites for the title, anything can still happen. Consistency is key and a continuous flow of points is what is required. Whoever wins this Formula 2 season will be a deserving champion!

Over the years, teams and drivers have raised the bar to such an exceptionally high standard of performance, strategic decisions, reliability and physical fitness that it takes an exceptional effort to come out on top at the end of the season. It is incredibly difficult to get all these aspects aligned especially when competitors are all trying to do the same thing, so when a motorsport title is achieved it has been well earned. The sacrifice, commitment and effort is forgotten and is the most rewarding thing a driver can experience. This is what drivers are chasing and this is what makes motorsport so fascinating. 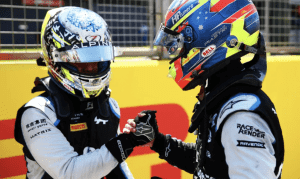