We spoke to the highly-rated Formula 4 driver Hugh Barter ahead of his F4 campaign in both French F4 and Spanish F4.

He will be providing us with some brilliant insight throughout the upcoming season.

Q: You performed well at Magny-Cours last year how excited are you to return to that track in 2022 and what’s the key to being quick there?

A: “I’m definitely looking forward to returning to Magny-Cours I think last year I was on the podium in all three of the races in the second round and then two podiums in the last round so quite successful there.

“I guess the key to that track is having the balls to go through both chicanes and carrying as much speed as you can.”

Q: How different are the new generation F4 cars to the old ones?

A: “The main difference from this year to last year is through the high speed corners.

“Not only high speed corners, in low speed as well definitely you can carry a lot more speed in the high speed because there’s more downforce this year and then in the low speed it’s a bit the opposite and you struggle to carry the speed with the extra weight in the Tatuus at least.”

Q: How much are you looking forward to racing at Spa in the test and later in the season?

A: “Racing at Spa, I’m definitely looking forward to it I literally just did a track walk around there and it’s crazy.

Definitely the hill of Eau Rouge, you don’t see it on tv until your really standing at the corner so I really look forward to that especially racing so hopefully everything goes well and we’re fast.”

Q: Who are you most looking forward to racing against in both Spanish and French F4?

A: I’m not sure really, I do look forward to at least in the French championship to racing against the two Japanese people one of them being a Red Bull junior I think affiliated with Red Bull.

Q: How different is racing in Europe to Australia?

But from what I see it’s quite similar, the only difference is probably Europe’s a bit more on the professional side of things and it’s taken a bit more seriously and obviously there’s a lot more broadcasting to the public and support by the general public but I think overall I enjoy Europe a lot and I hope to do well this year.” 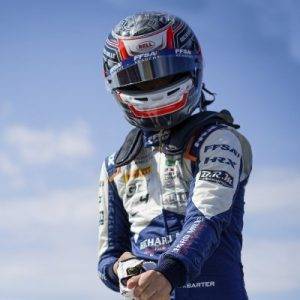