Jake Hughes was eyeing success on his home turf using the Formula 2 machinery for the first time before Qualifying failures left him at a disadvantage to start from P18. However, the Briton was satisfied to take the final points-paying position for Van Amersfoort Racing.

It wasn’t the easiest of weekends for Hughes, with undesirable results from all sessions. He started the round in which he talked excitedly about in the 18th and only managed to improve four places in the Qualifying session, which played a big part in his Feature Race.

After the race, Hughes explained to Inside F2 the things he wished could’ve gone right and his delight in seeing the fans back: “The weekend has been a bit of a struggle, to be honest. It’s been so good to be back and see all the fans here. The last time I was racing here was 2020. There were obviously no fans, but now being one step up in Formula Two and having the fans back was a great experience.” Stated Hughes.

“I wish we had a bit more pace in the car. We hit the ground running in Free Practice, which was hitting the ground not where we wanted to be. We made a step for qualifying with the setup, which wasn’t the right way to go, and that hurt us.

“Without that, if we just stayed where we were in practice, we might have been inside the top 10, which is where generally we normally qualify, so not like where we want to be, but also quite respectable.”

Reflecting on his performances in both races

As fellow rookie Jack Doohan conquered the challenging conditions in the frenetic Sprint Race in the soaked Silverstone circuit, Hughes almost got close to placing his Van Amersfoort Racing inside the top 10.

He was forced to change the ultimate strategies as it was the first wet race of the season to salvage some points, but instead, he gained three places to finish 11th, but it wasn’t enough to show the familiar surroundings his full potential.

He added: “In the wet yesterday was just a bonkers race. At some point, I was the slowest car on the track by four or five seconds, and at the end, I was the second or third-fastest car.

“I overtook three, three, or four guys twice in the race, and they overtook me once. It is back and forth like crazy. That was a bit of a weird race. I just missed out on the top 10, got P11, and then today starting P14.

“We went with the alternate strategy at the beginning, and I thought the safety car would’ve helped us a bit more than they actually did in the end.”

This time, he will take his learnings from the consistent results two years ago in F3 when he finished inside the top ten in all three races. Hughes believed that he understood the kind of challenge he would usually face completely.

Moving on to Sunday’s Feature Race, Hughes wasn’t entirely disappointed with how it played out for him. Even though there was a potential issue during the race, he made progress in taking one essential championship point for the team.

“I was a bit surprised when we came out of the pits, and I was still in P13 because it looked like it was not like the strongest second half of the stints on the hard tire like a pretty strong first half of the stint, keeping with Jehan (Daruvala) and then Jack (Doohan),” Hughes asserted,

“Then definitely, in the second half of that stint, they pulled away, and our normal issues of rear tire overheating came in too much. Nevertheless, it a good pit stops and a good turnaround. I went out and set the fastest half of the race at that point.”

Aiming for podiums from the consistent results

Looking at the missed opportunity in Monaco, when his car stalled on the line from the reverse grid pole even before the lights went out and the wrong car setup in Baku, Hughes always got close to winning his first Formula 2 maiden or a podium.

Despite being one of the most consistent qualifiers of the season, he never truly got the chance to step on a podium, which showed us that converting positions to points hasn’t always been easy for the Birmingham-based driver.

However, taking both weekends and Barcelona as an excellent example of when he and Van Amersfoort Racing were having solid performances, Hughes aims to take one of the trophies home, as there are still 14 races left from the 2022 season.

Hughes continued, “I think sensible is the word I’d use, and we’re building some consistency now after a period of around Monaco and Barcelona, where we were just nowhere, and wow.

“We were quick, but with the way the weekend came, we didn’t. We didn’t have a chance to score points. So we’ve built some consistency.

“We’ve been, I think, ninth, 10th, 11th, and 10th in the last four races and Baku in here, but now we just need to add in some pace, especially in the race, and then hopefully we’ll be there thereabouts for the podium.” 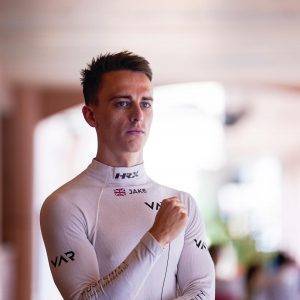