This weekend we followed the fortunes of F4 rising star Hugh Barter at the historic Pau Grand Prix in French F4.

The weekend started well with a solid performance in qualifying, as championship leader Barter was setting the initial pace with a 1m18.266s lap.

Elliott Vayron, Enzo Peugeot, and Yuto Nomura quickly improved into the 1m17s, However, Barter claimed back provisional pole by three-tenths of a second. Sauto Arao went faster by 0.111s to grab pole for race on. Barter was able to punch in a faster lap which would see him secure a start from the front for race three.

Hugh made the stronger start as he began just behind pole-sitter Souta Arao to pull off a crucial pass early on for the lead and win the first French Formula 4 race in Pau.

“Today was a good day, starting from second I knew I had to get into P1 ASAP, because I know it was going to be a hard track to pass at. I had to place the car well and keep my head down to keep Souta behind me.”

An action packed second race saw Romain Andriolo win from pole. Hugh was starting further down due to the reverse grid and knew that he had to make the most of every opportunity for championship points.

Following a good start form the Austrailian, late drama  at the at the Lycee hairpin involving initially Vayron and Provost, plus others in the aftermath,  resulted in Hugh going on to finish fifth.

“For race two I knew I had to get as many places as I could off the start and pick up the crumbs, which happened on the last lap, gaining two positions. So, in the end, it was some good points, we come away today with a bigger lead in the championship.”

Honda junior Souta Arao held off Hugh Barter to win the third French Formula 4 race in Pau, following a good start to return the favour from race one as the inside line offered more potential for the second placed driver.

After closing the gap and battling all the way, Arao held off the pressure to claim the win.

“We knew coming into the race that it was going to be hard to get a good start. After that, I knew it would be quite hard to overtake, basically, the roles from race one were reversed. In my opinion, I managed it well and grabbed the fastest lap, I made the best of the position I was in.”

The Pau Grand Prix is one of the oldest street races in Europe and one of the key moments of the season for junior formula racing.  Talking about the circuit itself, Hugh spoke highly of the historic venue;

“It’s really incredible, I’m grateful to have been given the opportunity to race here.  I was a bit lost for words when I first drove the track, it is an incredible feeling to get so close to the walls, especially in the downhill chicane.” 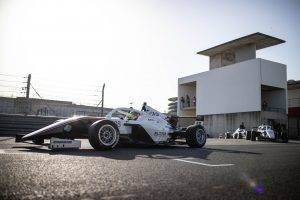