The FIA Formula 2 descends into the famous Hungaroring in Budapest for Round 10 and before the eventual summer break. The series saw plenty of action last time out in France and something similar could be on the cards for this weekend as well.

If the close championship was not enough for the teams, the weather will keep them on their edge. While Friday is expected to be a sunny day, the rest of the weekend is forecasted to be met with showers of rain.

From the beginning of the F2 season, MP Motorsport driver Felipe Drugovich has enjoyed a dream run at the championship. Currently the Brazilian enjoys a thirty-nine-point advantage over second-place Théo Pourchaire and third-place Logan Sargeant. The weekend will be crucial for the championship as the season progresses to the end in Abu Dhabi.

Elsewhere, the battle has also been heating up between teams as well. They have been neck-and-neck at each race and the results in France swung into ART’s favour as they moved to the top of the leaderboard with 209 points. MP Motorsports then trail the French outfit in second place with 199 points and only two points clear of third place Carlin with 197 points.

Prema Racing has been experiencing an up and down season so far. With both drivers either being on the wrong strategy or having mechanical retirements, can they turn it around here in Budapest? In 2020, Robert Shwartzman won and current F1 driver, Mick Schumacher, took the final step of the podium for Prema. The Italian outfit will clearly be hoping to maximise their weekend.

Another driver who will be looking to maximise his weekend is Red Bull Junior driver, Ayumu Iwasa. Taking his first victory in F2 at the Le Castellet circuit, the Japanese looks charged and is hungry to take more wins. “ I’m looking forward to returning to the Hungaroring,” says the DAMS driver. “I really like the track in Budapest. In Formula 3 last year, I won the race. It was my first victory in F3, so it was a very good memory.”

“The track is really technical – not a very long straight, not a lot of high-speed sections. It’ll be a difficult track for everyone. Also, it being a technical track means I need to have good confidence in the car and in my driving. In Formula 2, the car is completely different to Formula 3, so I’m looking forward to seeing the differences between F2 and F3 – that’s quite a big point.”

The DAMS driver also highlighted that it is incredibly difficult to put in a complete lap and that includes even F3. Ayumu believes that he will have to find the maximum limit during the Free Practice as he was given track limit warnings during F3. With the F2 tyre, he is keen on what Qualifying will bring for him.

Iwasa also highlighted that overtaking at the Hungaroring is also difficult. The lack of straights makes it a task for the drivers to make up positions. This then puts the pressure on Qualifying and Ayumu is aware of the challenges. He believes that if he has a good Qualifying lap, it would result in a better position for the Feature Race.

“I think Turn 1 will be one of the biggest threats for overtaking. If there are wet conditions,  opportunities should be everywhere because in F3 last year there was a wet race and overtaking was possible in every corner,” he says. Concluding his thoughts, the Red Bull Junior driver thinks that a lot of it depends on the car potential as one can lose a lot of positions or gain them going into Turn 1.

Talking about the technical aspect of the cars, tyres will play a very important in deciding the outcome. Teams will have the medium and soft tyres to play with during the weekend. The winning strategy in 2020 was starting on the medium tyre and then switching to the soft tyre for the last stint.

“The Hungaroring is fairly demanding on tyres despite the relatively low average speeds,” says Pirelli Motorsport Director, Mario Isola.  “The twisting and technical track means that the tyres are constantly working without any long straights to cool them, and temperatures are usually high, too. Therefore a degree of management will likely be needed for the two nominated compounds, the P Zero Yellow medium and P Zero Red soft.”

Isola concluded that while overtaking isn’t easy, getting the most out of the tyres will be important during qualifying. He further added that good management and the right strategy will be the key in Hungary. 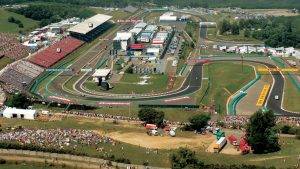