HWA-BWT-Racelab – 10th in the Teams Championship

13 points, no race wins or podiums

With a new name and a new line up, HWA-Racelab could put a traumatic 2019 behind them and move forward in the championship under new ownership in 2020.

From the start, HWA-Racelab struggled for pace and reliability as new driver line up Artem Markelov and Giuliano Alesi found themselves frequently bottom of the timesheets.

Markelov and Alesi both struggled to get up to speed in the race and could only fight for the scraps at the tail end of the points in the race which seemed a poor reward for a hard day of battling.

At the end of the year, Alesi left for MP leaving a merry go round in the second HWA car which was filled by Jake Hughes and Theo Pourchaire as both staked their claim for a 2021 drive.

When Artem Markelov announced his return to Formula 2 it was greeted with a mixture of euphoria and scepticism.

The euphoria that Formula 2’s greatest showman was making a return to the second tier of motorsport after a year away in Japan. Some though doubted whether Markelov had lost the spark that had made him a fan favourite.

It was clear early on however, that luck nor a quick car would be on Markelov’s side for the season ahead with retirement and eighteenth poultry rewards after a nightmarish start to his return to the series.

Markelov then further compounded things by spinning off on the parade lap before the second Austria Feature race putting him once again on the back foot with Hungary seeing him taken out by Christian Lundgaard ruining yet another weekend.

Both Silverstone and Catalunya meetings failed to generate any points and by Spa, he was one of four drivers who had failed to score a single point.

That drought ended in the Sprint race with eighth after a brilliant drive from sixteenth saw him pick up a point and in Mugello, he was eighth again picking up four more points and reverse grid pole before his Sprint race was wrecked by picking up front wing damage.

The rest of the season proved fruitless leaving Markelov with his worst tally of points in his entire GP2/F2 career.

Before the 2020 season had begun Giuliano Alesi had made headlines for all the wrong reasons.

His father the great Ferrari driver Jean Alesi had sold his prized Ferrari F40 to fund his son’s motorsport career a noble gesture of a father’s love it seemed.

But as the 2020 season finally kicked off it looked less money well spent and more money flushed down the pan after Alesi had a dreadful practise and qualifying session in the first Austria meeting.

However, Alesi salvaged an impressive sixth from eighteenth before his Mecachrome engine exploded in the Sprint race ruining all chance of taking a podium.

From then the first Austria meeting Alesi failed to score a single point at HWA as the Frenchman’s miserable season got worse with a dismal run of form which saw him struggle to get out of the tail end of the results along with three more DNF’s including a double at Mugello which was the final straw for the Alesis who decided to part company with HWA and head to MP Motorsport for Sochi.

Jake Hughes-23rd in the driver’s championship

Alesi’s replacement was Brit Jake Hughes who came straight from HWA’s Formula 3 team and received a late call up to the team on the Tuesday of the race.

Hughes came into Sochi with zero testing under his belt but far from disgraced himself with fifteenth on the grid out qualifying race winners Felipe Drugovich and Dan Ticktum a fine start to his Formula 2 career.

In the Feature race, Hughes managed a credible twelfth and just missed out on a single point by just over eight seconds but the Sprint race saw him involved in a first corner shunt which eliminated him and Guilherme Samaia on lap one.

Théo Pourchaire-24th in the driver’s championship

Like Jake Hughes, Théo Pourchaire was thrown into the Formula 2 deep end with no testing but unlike Hughes, he would get two weekends to showcase Formula 2 bosses his talent whilst having the honour of being the youngest driver to ever race in F2 at the age of seventeen.

The Frenchman who finished runner’s up in the Formula 3 championship behind Oscar Piastri had a solid start to his Formula 2 career with sixteenth on the grid before finishing eighteenth in the race before having to retire early from the Sprint with a fire extinguisher failure.

For the second round in Bahrain, Pourchaire qualified seventeenth ahead of championship leader Mick Schumacher, however, the Feature race would only see him finish eighteenth before completing the season twenty-first in the Sprint.

It was a nightmare season for HWA-Racelab who only finished ahead of Trident in the final standings with HWA looking at reshuffling the driver line up for 2021 in the hope that results will pick up.

Markelov and Alesi both look unlikely to be retained after both suffered nightmare seasons and with Pourchaire looking at driving for ART it may mean that HWA may have to look for drivers that have money as well as talent. 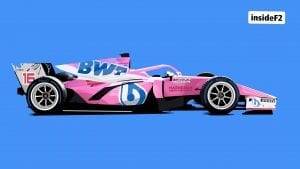