The Formula 2 Championship battle continues fittingly in Italy as we see a Ferrari Academy Driver battle from Ilott, Shwartzman and Schumacher.

Callum Ilott’s season for the most part has been one of a champion in the making. He has shown the racing world that he can deliver one lap pace, overtake and control from the front. All of these skills are what the watching Formula 1 teams want to see for any possible race seat in the future.

However, Callum has had a few unfortunate incidents that will also look to build on his character as the pressure mounts from the gaggle of drivers still in the hunt for the championship.

Ilott has plenty to look forward to given his past form at the iconic circuit and his connection to Ferrari and Italy itself;

“Monza is close to my home here in Italy. It’s the fastest circuit I think I’ve visited, and the most ‘full throttle’ that you’re likely to be at a circuit unless it’s an oval. There are some very good overtaking zones, but also with some complex corners where a good exit is important. There’s lots of opportunities to make a mistake, which makes it difficult to get right, especially in Qualifying.

“My first pole position in Formula 2 last year was a very good memory. I think I had a win here back in 2017 too, so it would be nice to get back. This was one of my better races last year, so I’m looking forward to it.

“It was a decent circuit last year for tyre management, with nothing too ridiculous, but it’s still one you have to be prepared for. Good strategy and good racecraft are something that is very important at Monza. You also have to try and put yourself into a good position in Qualifying and try not to get disturbed too much. As I found out last year, braking when the tyres are almost close to having nothing left gets a bit difficult.

“I think most of the action will probably be at the two chicanes. A big slipstream out of Parabolica makes for a good overtaking zone into the first corner, but you’ve got to be careful because they can sometimes get you back into the second chicane.

“I had a very good race weekend here last year, so I imagine that I should start off quite well and then see how we do. Last year, the conditions were a bit mixed for the first half of the weekend, but hopefully I think I should be in for a good result this weekend.”

Will the Brit take back his lead on the Formula 2 Championship? 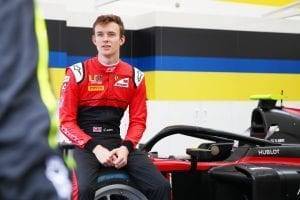