Callum Ilott has inherited victory at the Sprint Race in Italy after Dan Ticktum was disqualified for having too little fuel in his car at the end of the race.

The DAMS driver took the lead off the line and never looked under pressure, cruising to the finish, but he ground to a halt shortly after crossing the line, and the stewards disqualified him.

Ilott takes 15 points for the win, with Christian Lundgaard promoted to second and Mick Schumacher to third, with both taking their second podium of the weekend.

Ticktum got a great getaway, passing polesitter Louis Deletraz before Turn 1. Ilott was under pressure from title rival Yuki Tsunoda, but the Brit held P3.

Yesterday’s winner Mick Schumacher got a good start again, and overtook Lundgaard at Turn 3 on Lap 2.

Schumacher’s fifth place became fourth as Tsunoda’s Carlin slowed. The Japanese driver dropped to the back of the field, putting a huge dent in his championship hopes.

After his poor start, Zhou began to recover with an easy move on fellow Renault academy driver Lundgaard for fifth.

Zhou then put pressure on Schumacher and the German finally made a mistake. Going defensive, Schumacher locked up and went straight on at the first chicane, losing positions to Zhou and Lundgaard.

But just a few moments later, Zhou was going slowly with a mechanical problem. He dropped way down the field from P4, ruining his already faint title aspirations.

Midway through the race Ilott finally made the move on Deletraz for second. The Brit was knocking on the door for a few laps and made the move with DRS on the pit straight.

Two laps later and Deletraz was losing another position, this time to the hard-charging Lundgaard.

On Lap 17, Felipe Drugovich was hit in the rear by Roy Nissany, sending the Brazilian spinning on the exit of Turn 2. There was the threat of a safety car, but fortunately for Ticktum, Race Control opted for a VSC instead.

At the VSC restart Ilott had to defend from Lundgaard, whilst Schumacher improved to P4 at the expense of Deletraz.

Nobody could get near Ticktum though, who crossed the line five seconds ahead of Ilott following his terrific performance. The win was in similar style to his previous victory this year at Silverstone, but it wasn’t to be thanks to his fuel situation.

Ilott defended all the way to the line for what was to become the win ahead of Lundgaard, with Schumacher getting another strong finish.

Deletraz was under pressure from Robert Shwartzman for what became fourth but held on, ahead of Jehan Daruvala. Jack Aitken moves into seventh, with Nikita Mazepin recovering from the back of the grid to take a point. 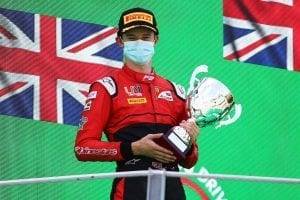