Callum Ilott kept his Championship title chances alive with a dominant pole position in Bahrain, his fifth of the 2020 Formula 2 season.

Lining up on the front row alongside him will be Felipe Drugovich in second and Dan Ticktum P3 after another session littered with red flags.

With every point counting in the title battle, Ilott had work to do to catch Mick Schumacher’s 22 points lead – his consistent qualifying has continued.

After the first representative laps, the British driver topped the timings with a 1:41.479. He was followed by the ART of Marcus Armstrong and the second UNI-Virtuosi of Guanyu Zhou.

However, an unlucky Yuki Tsunoda was caught out by a snap of oversteer in Turn 12, resulting in him spinning and stalling his Carlin and triggering a red flag.

He attempted to make his way back to the pits. However, he was audibly unhappy after not being allowed to restart the car due to rules on outside assistance, as the marshals had pushed him.

With 20 minutes left on the clock, the field were back out for their second runs, with Drugovich and Ticktum improving to second and third on the timing sheets.

Championship leader Schumacher was on a quest to improve, which initially saw him climb up the order to sixth after languishing in 12th.

However, good stints from other drivers saw Giuliano Alesi, Mazepin, Daruvala and Lundgaard leap-frog the Championship leader within seconds.

The session ended prematurely with a minute to go after Alesi pulled over in Sector 1 with an engine issue.

The yellow flag did not affect Drugovich who set the fastest time in the final sector but was unable to beat Ilott’s initial time.

In the end, the session was red flagged and the Ferrari Academy driver took pole position and the four points available, which could prove to be crucial in the title battle.

For tomorrow’s Feature Race, Armstrong will be lining up in fourth ahead of Zhou and Alesi, who achieved his best qualifying position of the year.

Mazepin, who was fastest in practice, lines up in seventh. Daruvala and Lundgaard will start in eighth and ninth, with the PREMA of Mick Schumacher in 10th.

Louis Delétraz starts in 11th with Nissany 12th after his FP1 appearance with Williams. Piquet will line up in 13th, with Shwartzman struggling in the second PREMA in 14th.

Jack Aitken could only manage 15th, whilst Theo Pourchaire out-qualified his teammate, Artem Markelov, on his Formula 2 debut. Pourchaire lines up in 16th, with the second HWA in 21st place.

Marino Sato starts on the ninth row in P17 with Sean Gelael for company on his return after a nine race absence.

Guilherme Samaia will line up in 19th, with a disappointing session for the second Hitech of Luca Ghiotto in 20th.

Tsunoda will start at the back of the grid after being unable to set a time before his incident.

Will Callum Ilott’s Pole enable him to close the gap to Mick Schumacher in the Feature Race? 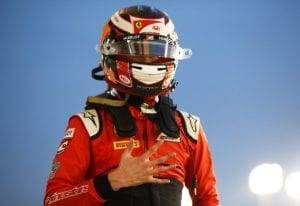