Despite a baking hot Free Practice session that saw air temperatures hit 32 degrees, spots of rain fell down before the start of Qualifying.

At one point the forecast predicted a 40% chance of rain in the session. Despite this, track temperatures still reached the early 40s.

There was a delay to the start of Qualifying courtesy of damage to a kerb at Stowe corner after Sebastian Vettel’s under-tray whacked the concrete during Formula 1’s Practice 2.

This caused a 15 Minute delay to the start of the Formula 2 session.

Qualifying finally began after the damage was fixed with the Carlin of Jehan Daruvala leading a convoy of 22 Formula 2 cars out of the pits.

All were keen to warm up their tyres and get a clear track position.

Christian Lundgaard threw down the early gauntlet with the Dane topping the times of a lap of 1:39.650 beating Yuki Tsunoda for the honour of provisional pole in the early stages of the qualifying session.

Daruvala and Sean Gelael had wild moments on the exit of Becketts causing both cars to take a brief flight into the air as well as spreading dust all over the track.

Lundgaard increased his advantage at the top of the times with the Dane producing a storming lap to go just under six-tenths quicker than his first run.

Jack Aitken also had a good start to qualifying with the Brit just over a 10th behind Lundgaard. The Williams junior time was good enough for second ahead of Luca Ghiotto and Nikita Mazepin.

Silverstone briefly went quiet as the field barring Artem Markelov went into the pits to change the soft rubber for their second lap, with the Russian having to weave furiously in order to warm up his tyres – he improved from 21st to 16th.

With the times tumbling Dan Ticktum and Guanyu Zhou produced mighty laps to move themselves up into the top six with Ticktum third and Zhou sixth.

Mick Schumacher’s lap was compromised through a mistake on the exit of Chapel.

Lundgaard’s reign at the top of the timesheets ended thanks to Ilott who pinged a superb lap of 1:39.062 to snatch provisional pole position ahead of Lundgaard.

The Dane then promised that his next run would be a good one over the team radio but he just missed out on reclaiming pole position in the final few corners after a mixed lap.

However, no one could topple Uni-Virtuosi driver, Ilott, who hung onto pole position after Gelael spun at Copse stalling his DAMS and bringing out the yellow flags in sector two ruining the laps of Messrs Schumacher and Zhou.

With the yellow flags out the grid stayed as it was after the first runs with Ilott taking pole ahead of Lundgaard and Aitken who had his best qualifying of the year.

Ticktum managed a good fourth ahead of Ghiotto and the unlucky Zhou with Mazepin, Schumacher, Delétraz and Tsunoda rounding off the top 10.

Robert Shwartzman had a disappointing qualifying where he was only 11th.

Last week’s pole-sitter Felipe Drugovich couldn’t replicate his qualifying pace and could only manage 12th ahead of countryman Pedro Piquet and Marino Sato.

Gelael was 15th ahead of the struggling Daruvala in 16th.

Nobuharu Matsushita will be starting tomorrow’s Feature Race alongside fellow Formula 2 veteran Markelov on the ninth row of the grid.

Marcus Armstrong had a torrid qualifying and could only manage 19th alongside fellow Ferrari Academy junior Giuliano Alesi.

Roy Nissany and Guilherme Samaia filled out the back row of the grid. 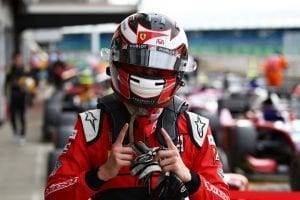